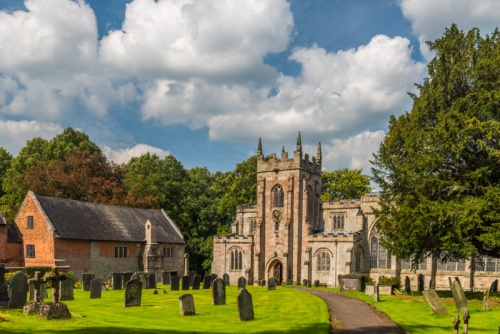 The church of St Mary and St Barlok stands beside the medieval manor house of Norbury, in a timeless setting that evokes a sense of heritage and the very best of the English countryside.

The church was begun in 1295, when the Fitzherbert lords of the manor rebuilt an earlier Norman church, itself built to replace a yet earlier Saxon building. The chancel was built first, and the nave and transepts added over the next 2 centuries. 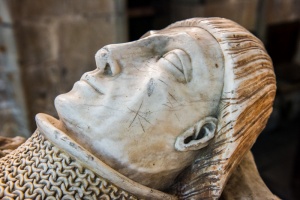 Barlock may be identified with St Finbarr, a 7th-century Irish abbot and patron saint of Cork. The link with Norbury is tenuous, but it seems likely that John Fitzherbert of Norbury learned about St Barlok when he served as Governor of Waterford in 1174.

The church is closely linked to the Old Manor of Norbury, which borders the churchyard, and with the Fitzherbert family, lords of the manor for over 500 years. Many of the Fitzherberts are buried within the church, and their memorials are perhaps the most interesting feature of the church interior.

One of the oldest features in the church is the font, dated to around 1200. The bowl is quite simple, but it stands on a nicely carved base of clustered shafts.

I said the font is one of the oldest features, but it can't compare with a pair of Saxon cross shafts that have ben brought within the church to preserve them from weathering. The cross shafts were discovered during restoration work in 1899. There are thought to date to about AD 900 and feature traditional Saxon knotwork pattern carving. 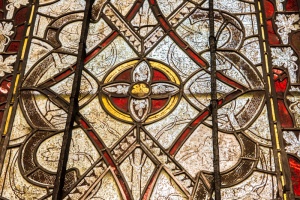 Though the Saxon crosses are by far the oldest feature in the church, the most interesting historical objects are the Fittzherbert family tombs in the chancel. The most obvious is a pair of tomb chests, to Nicholas Fitzherbert, the 11th lord (d. 1473) and Ralph Fitzherbert, the 12th lord, shown with his wife, Elizabeth Marshall.

Both tombs are made of alabaster from Chellaston, and are together among the most beautifully preserved memorials of the period, true examples of superb medieval craftsmanship, with 'weepers' arrayed around the base of the tomb chests.

Set into the chancel floor is a memorial brass to Henry Prince, rector from 1466-1500. Prince was responsible for rebuilding the roof of the chancel where he lies. Nearby, on the sanctuary step, is a stone commemorating Ann, the last Fitzherbert to be buried here. Ann was the wife of William Fitzherbert of Swynnerton, who inherited Norbury Manor after John Fitzherbert, the 18th lord, died at the Battle of Lichfield in 1648. 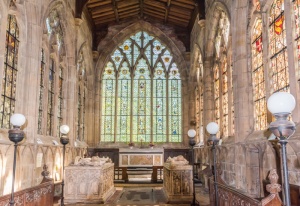 The chancel, a 'lantern in stone'

A marble pave stone near the altar is a memorial to Lt Col HA Clowes, who died in Cairo during WWI. Clowes was the son of Samuel Clowes, who bought the estate and church in 1899 wand restored the chancel roof.

Also in the chancel is an unusual double-piscina, probably dating to the 14th century.

The chancel has one more remarkable historic treasure; the windows are filled with rare grisailles glass, inserted in 1306. The Norbury glass is among the finest examples of early medieval glass in the country. It is a mix of coats of arms to church patrons, and geometric patterns.

The effect is simply stunning. There are 8 grisailles panels, 4 on the south and 4 on the north. The glass admits so much light that the east end of the church seems infused with sunlight during the day. For that reason the chancel has been dubbed a 'lantern in stone'.

The east window in the chancel is a lovely piece of early Perpendicular style architecture. It is possible, though by no means certain, that it was designed by Henry Yeveley, from the nearby village of Yeaveley, who went on to be the chief royal architect and designed churches, monuments, palaces, bridges, and other great buildings. Perhaps his most famous creation is the nave of Canterbury Cathedral.

The chancel glass includes coats of arms to kings of England, and the French royal family, but what is really striking is that it also has a coat of arms of Robert the Bruce. Now, if the glass was installed in 1306, as thought, Bruce might have been considered an ally, even though from 1307 he was England's enemy, as he struggled to create an independent Scotland and fought with first Edward I, and later, Edward II in the Scottish Wars of Independence.

Norbury has links to novelist George Elliot (nee Mary Anne Evans). The author's father lived nearby, and attended the church, where he sang in the choir. A woodworker by trade, Evans crafted the altar in the north aisle. Elliot set her novel Adam Bede in the nearby village of Roston, and portrayed Norbury in the book, calling it Norbourne. George and Mary Evans, Elliot's grandparents, are buried in the churchyard, and their grave is marked by a sign.

The church is usually open daylight hours, and is well worth a visit, especially if you can time your visit with days when the Old Manor beside the church is also open. 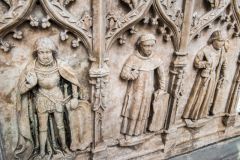 More self catering near Norbury

More bed and breakfasts near Norbury