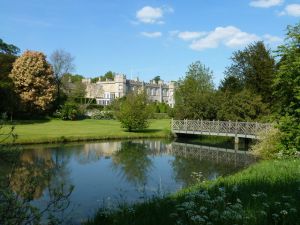 Deene Park House
Deene Park is a 16th-century manor house that has been in the hands of the Brudenell family since 1514. Deene Park was built around a much older medieval manor house and incorporates parts of the older building. For many years the house was the seat of the Earls of Cardigan. Among the Earls resident at Deene was the 7th Earl, who led the ill-fated Charge of the Light Brigade during the Crimean War.

Mementoes of the Crimean War make up part of the collections on view to visitors. Other items include a large collection of family portraits and other paintings. The house is arranged around a central courtyard, and outside the house is a large park, with formal gardens and a lake as a focal point. The gardens include mixed borders and old-fashioned roses.

Deene was owned by the Abbey of Westminster since at least the 11th century. During the reign of King John, an annual rent of Â£18 was imposed, which continued to be paid until 1970. Sir Robert Brudenell (1461-1531) was a prominent barrister who rose to become Lord Chief Justice in the Court of Common Pleas. He benefitted from an advantageous marriage to a Leicestershire heiress, he purchased Deene in 1514.

Sir Robert's grandson, Edmund, inherited in 1531. He enlarged the great hall and built the imposing fireplace which features the coats of arms of Sir Edmund and his wife Agnes. He added an Italianate porch, and rebuilt the east wing.

Sir Edmund's diary, which is exhibited in the Library, records a visit to Deene Park by Queen Elizabeth I in 1566. It was left to a much later Brudenell, James, 5th Earl of Cardigan, to build the Bow Room, Dining Room, Drawing Room, and the White Hall.