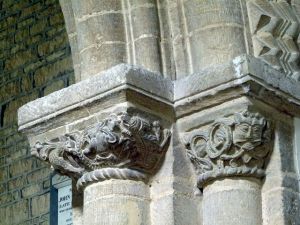 The Norman chancel arch in St John's Church, Wakerley
Standing on a hill looking over the Welland Valley, St John's church dates to the 12th century and retains some very nice Norman features. The finest of the Norman work is the chancel arch, which is beautifully carved and is supported on capitals decorated with wonderful Norman carvings almost lace-like in their quality and complexity.

To either side of the chancel arch are 12th-century blind arcades which may have been originally intended as reredoses for side altars. There are round-headed Norman windows in the nave.

There are more Norman carvings in the south aisle, where you will find a set of nine carved corbels with a variety of designs including a horse's head, human heads, and an odd collection of beasts.

There is further Norman carving on the exterior east wall of the south aisle, where you can easily view re-used stones showing Norman sawtooth carvings.

Other features include a striking 14th-century tower with spire, late medieval aisled nave and clerestory, and a large Perpendicular east window. There is a 13th-century font and several monuments to members of the Cecil family of nearby Burghley House.

North of the church is the site of Wakerley Manor House. The church is no longer used for regular worship and is in the care of the Churches Conservation Trust. It is normally open daily to visitors. 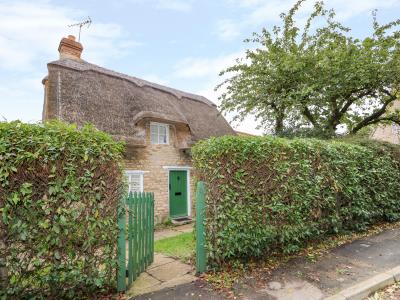 This superb thatched cottage rests in Wakerley, near Barrowden, in the East Midlands and can sleep two people in one bedroom.
Sleeps 4