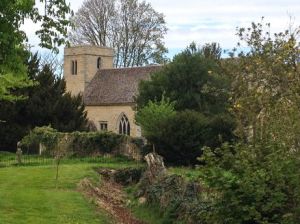 Blatherwycke, Holy Trinity Church
An 11th-century church with a 17th-century tower, Holy Trinity church stands beside a lake, near the site of a vanished mansion. The building consists of a nave, chancel, north aisle and north chapel, south porch and west tower.

The lower part of the tower and the south door are Norman, and the south arcade dates from about 1200. Other Norman features include the tower arch, the west doorway, and a bell-opening in the tower, which all date to the period 1080-1100. The font is 12th century but stands on a Victorian base.

There are large 14th-century windows in the south wall, making the interior nice and bright. The interior has monuments to the O'Brien and Stafford families of Blatherwycke Hall, and a memorial to poet Thomas Randolf (d. 1630).

The best of the memorials is the Elizabethan monument to Sir John Stafford against the north wall. This is beautifully carved and shows Sir John with his wife and eight children, including an infant who must have died before being baptised.

One unusual feature is that the entire family is depicted facing the same direction. This is quite rare, as memorials of this period usually show the male and female members of the family facing each other. Nearby on the wall is a brass to Sir Humphrey Stafford (d. 1548).

The church is located in the grounds of the former Blatherwycke Hall, next to the stables. The Hall was used by the armed forces in WWII but was left in such a poor state that it was demolished in 1948.

Holy Trinity is no longer used for regular worship and is in the care of the Churches Conservation Trust. It is in a lovely location and well deserves a visit.