HERITAGE HIGHLIGHTS:   The magnificent Norman font is a wonderful piece of historic craftsmanship 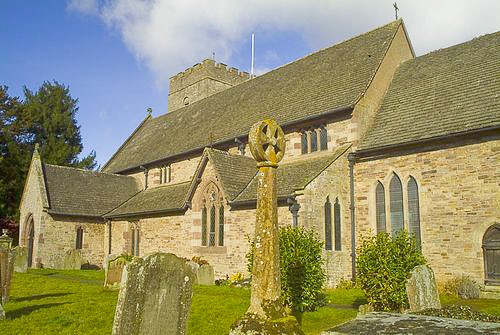 Eardisley parish church is famed for its extraordinary carved Norman font, which must be considered one of the finest fonts in England if not one of the finest bits of Norman Romanesque architecture of any kind. The font is built like a truncated hour-glass, or a goblet, with a short circular base supporting a wide circular bowl.

Both the base and the bowl are carved in fantastically intricate patterns of figures, writhing vines and foliage, and geometric patterns. The font dates to the early 12th century and was the work of a team of sculptors known as the Herefordshire School, who were also responsible for the superb carvings at Kilpeck and Shobdon.

The carvings are designed to tell a cautionary tale; a sinner saved from the clutches of evil. In the carvings, the figure of a man is pursued by a lion (evil) and is saved by Christ from the lion. Christ is accompanied by the Holy Spirit in the form of a dove above his shoulder. This scene is also interpreted as a depiction of the Harrowing of Hell. In another part of the design two knights engage in combat.

The two figures are thought to represent Lord Drogo of Clifford and his son-in-law, Ralph de Baskerville of Eardisley, who engaged in real-life combat in a dispute over ownership of land sometime before 1127.

The elder knight was killed, but Ralph repented of his actions and became a monk at Gloucester Abbey. It may be Ralph who was responsible for hiring the Herefordshire School of carvers to create the font for Eardisley church. For a very thorough and quite scholarly article about the font, see the Corpus of Romanesque Sculpture website. 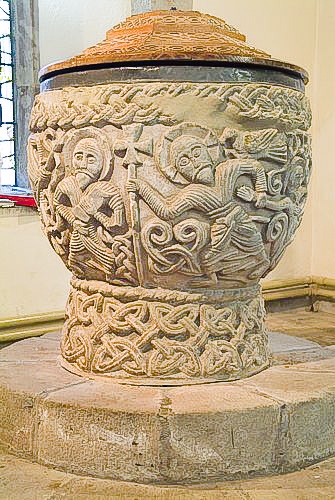 There is much to admire about Eardisley church beyond the much-celebrated font, however. The building is largely 14th-century work, with a west tower containing a ring of five bells. The church consists of a nave with north and south aisles, the south dating to the 12th century and the north to a century later.

The south arcade features attractive carvings on the chamfer stops of the piers, including a lion's head and several human heads. There are two loose fragments of 12th-century carving on display, and another fragment has been built into the sill of the east window in the south aisle. The church contains displays on the local history of Eardisley village and the church building itself.

Eardisley village itself is one of the most popular 'black and white' villages of Herefordshire, with a number of attractive timber-framed buildings. Just outside the village at Hurstway Common is an oak tree thought to be one of the oldest and largest in England.

NB. Do not mistake Eardisley with the similarly named Eardisland, also in Herefordshire. 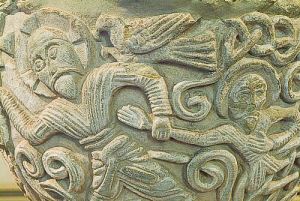 The Agent's House Bed And Breakfast - 3 miles
Hereford, Herefordshire
From: £70.00 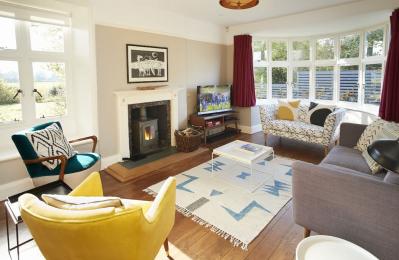 Green Gables is a spacious 1930's period house set in large gardens in the picturesque village of Eardisley. This former doctor's house and surgery has been recently converted into a …
Sleeps 8 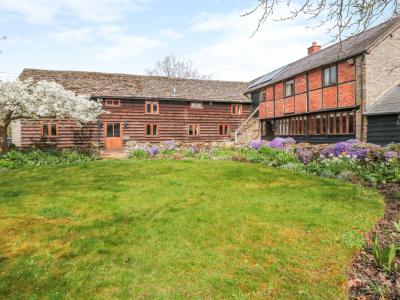 This character barn-conversions rests on the outskirts of Eardisley and sleeps up to six people, in three bedrooms.
Sleeps 6