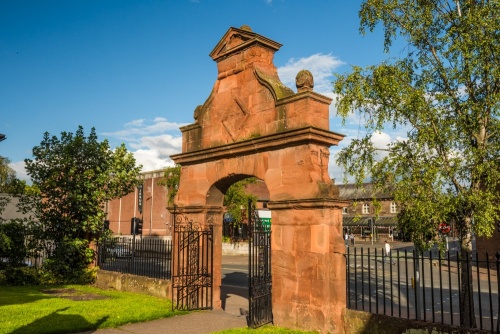 Venn's Arch from the burial ground

Rev John Venn was perhaps the most important public benefactor in Hereford's long history, but one that even local residents don't know about. Venn served as the vicar of St Peter's and St Owen's Churches from 1833-1870.

More importantly, he and his sister Emelia were extraordinarily energetic in their efforts to improve the plight of the city's poorest residents. The Venns founded the Hereford City Mission, built a corn mill and a model farm, established a school and the Working Boy's Home on Bath Street, helped launched Hereford's public library, brought the YMCA to the city, and created the Hereford Society for Aiding the Industrious (HSAI), which is still active. His activities were based on a combination of charity and industry; he wanted to offer a helping hand but also to teach the poor to become self-reliant.

When Rev Venn died in 1890 he was buried in St Peter's burial ground, which, due to the space constraints of the church's city-centre site, is located on Commercial Road, a ten-minute walk from the church itself. 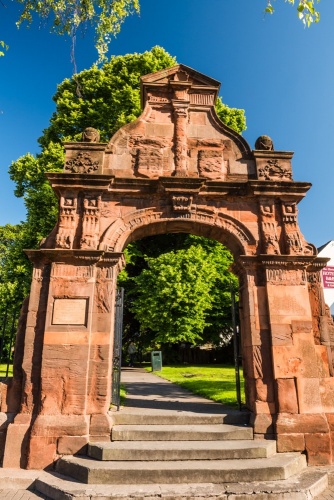 The arch from Commercial Road

The burial ground is no longer used for interments; indeed it seems more like a public park. Most of the old gravestones have been removed to the boundary wall, and only a few of the larger memorials still stand in place. Among these is Venn's grave, protected by iron railings just west of the path that links Commercial Road to Canal Road.

The most striking feature of the burial ground is not Venn's grave, however, but a striking red sandstone ceremonial arch facing onto Commercial Road. The arch is so weathered that it appears to be ancient, and the 'Jacobethan' style helps emphasise the illusion of age.

In fact, the arch dates to the very late 1881. It was designed by EH Lingen Barker as an elaborate entrance into the cemetery, in memory of Emelia Venn, who was equally active in her brother's reforming activities. When Rev Venn died in 1890 the arch was re-dedicated in honour of both the brother and sister, with the addition of a plaque on the southern pier of the arch. 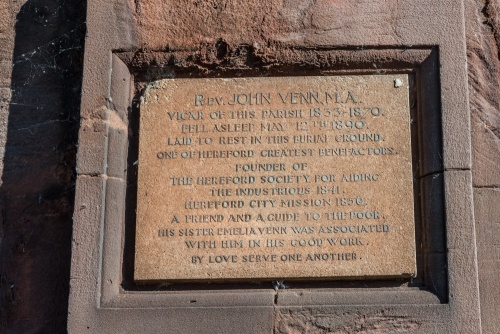 Rev. John Venn, M.A.
vicar of this parish 1833-1870.
Fell asleep May 12th 1890.
Laid to rest in this burial ground.
One of Hereford [sic] greatest benefactors.
Founder of
The Hereford Society for Aiding
the Industrious 1841.
Hereford City Mission 1850.
A friend and a guide to the poor.
His sister Emelia Venn was associated
with him in his good work.
By love serve one another.

The decorative arch looks like it would be at home acting as the entrance to a Tudor manor house. it is richly decorated with ornamental pillars with ball finials, and several extremely worn coats of arms. The central passage is reached by a flight of steps, with iron gates across the archway. The arch is topped with a pediment in Dutch style. 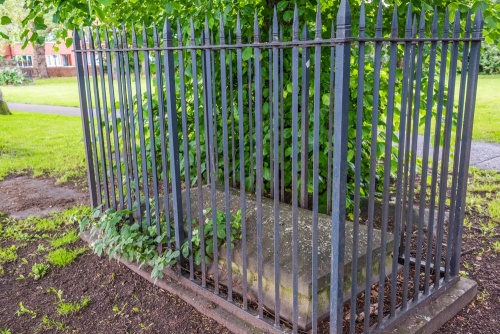 Nowadays the burial ground seems to serve mainly as a quick pedestrian route between busy Commercial Road and the housing developments along Canal Road.

At the western (Canal Road) end of the cemetery, to the right of the path, is an ornate cast-iron 19th-century drinking fountain, apparently without a water supply.

The Venn Arch is on the west side of Commercial Road opposite Union Walk. It is not signposted but it is impossible to miss. There is no dedicated parking for the arch or the cemetery, but it is an easy walk from the city centre. The nearest postcode is HR1 2BD. 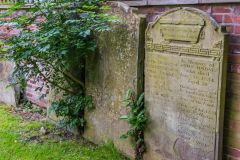 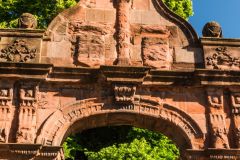 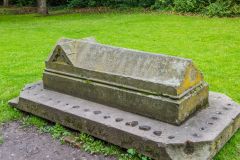