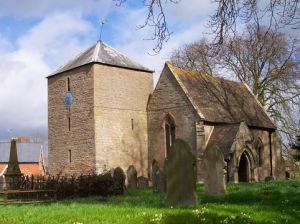 Westhide, St Bartholomew's Church
St Bartholomew's is a very striking country church composed of a squat and stolid west tower and a nave, chancel, and south aisle. The oldest part of the church is the tower, which dates to the Norman period - probably 12th century. This is a very low structure topped with a pyramidal roof.

The chancel arch and nave arcade are in the 14th century Decorated Gothic style. In the chancel are a pair of 14th century stone corbels, depicting the head of a man (north wall) and a woman (south wall). Set into the south wall is a 14th-century piscina. Under it is a 17th-century slab on its side, carved with figures of a woman and a man, both headless.

In the 14th-century south aisle are a tomb and effigy thought to be that of the church founder. The arch over the tomb niche shows evidence of 14th-century paintings. The effigy atop the table tomb shows a recumbent male figure, his feet resting on a dog.

Also in the south aisle is a Romanesque font, probably carved in the 13th century, with a round bowl atop a central shaft. You can see more remains of medieval painting on the soffit of the east window. The window is flanked by corbel heads representing a bishop and a queen.

Against the west wall is a carved alabaster slab commemorating Richard Monyngton, who died in 1524, with his wife Alice. Beneath the couple are arrayed figures of the couples' 8 sons and 8 daughters.

Westhide church is Grade I listed for its historic interest. 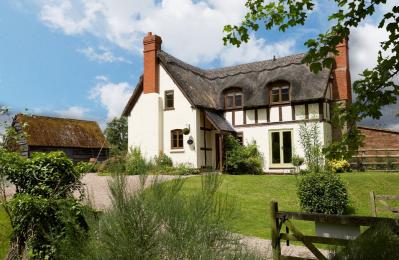 This cosy retreat in the village of Westhide is just two miles from the A4103 which links Hereford and Worcester. You have access to 400 acres of oak woodland with …
Sleeps 6