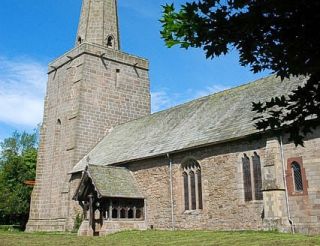 Withington, St Peter's Church
There was a church at Withington as early as the late Saxon period. The current church is largely 12th and 13th century, with a solid late 13th-century tower topped by a strikingly slender 14th-century spire.

The most notable memorial in the church is a brass tablet in the chancel to William Saxeye (d. 1612). Saxeye served Elizabeth I as a Chief Justice in Ireland.

Outside in the churchyard is an ancient cross, the steps and base of which are 14th or 15th century. The lych gate leading to the churchyard dates to the 16th century, though it has been the subject of a much more modern restoration.