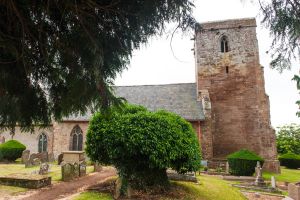 Foy, St Mary's Church
A lovely church in a rural setting overlooking the River Wye and affording excellent views across the Wye Valley. St Mary's is primarily a 13th-century building, though there are traces of a much earlier building incorporated into the north doorway and the font.

One unusual feature is that the church is not oriented on a traditional east-west axis, but more south-west to north-east. The chancel arch and north doorway are 13th-century work, but much of the nave was extended in the 14th century when a west tower and south porch were added.

The story is told that the stone for the 14th-century expansion of St Mary's came from Eaton Tregoes Castle, of which no trace remains. The only trouble with that theory is that no one really knows where the castle was located, what it looked like, or when it was pulled down. 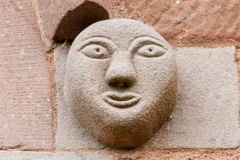 The mystery continues with a carved head on the exterior arch of the north-west window. The head appears to be that of a bishop, possibly St Thomas Cantilupe (see Hereford Cathedral).

Opposite is woman's head, possibly that of Juliana, St Thomas's sister, who married Sir Robert de Tregoz II of Tregoes Castle. Sir Robert was killed at the Battle of Evesham in 1265, fighting on the side of Simon de Montfort and his rebellious barons.

The east window is in Perpendicular style, but it was not actually built until about 1640, according to the will of John Abrahall, who left clearly detailed instructions that the window should be like that at Sellack; it is so like it in fact that the glass is a direct copy.

The font is quite unusual; it is decagonal (10 sided), which makes it unique in Herefordshire. It also has the largest diameter bowl in the county. Behind the pulpit is the niche tomb of Sir Hugh Walterton, chamberlain to the Duke of Lancaster, (later to become Henry IV).

There is an altar tomb by the pulpit with a 13th-century effigy of a lady, and a similar effigy in low relief in the chancel. There are wall tablets to members of the Abrahall family throughout the church, including a very fine memorial to George Abrahall (d. 1673).

Other interesting features include the 17th-century carved choir stalls, and a finely carved rood screen made up of fragments from the 16th and 17th centuries. The pulpit and communion rails are also 17th century. 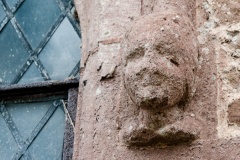 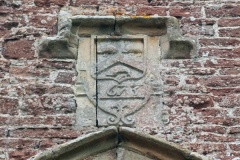 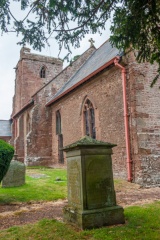 South exterior of the church 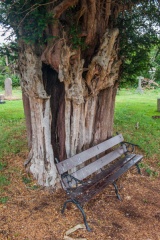 The ancient yew tree
in the churchyard