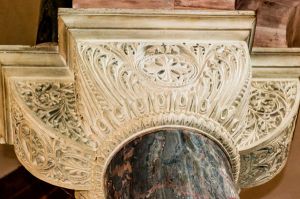 Hoarwithy, St Catherine Church
A fascinating Victorian chapel in rich Italianate style. Hoarwithy is technically a chapelry under nearby Hentland church. The man responsible for building the first chapel at Hoarwithy, Rev Thomas Hutchinson, was curate of Hentland parish in 1840. His fairly simple chapel was a small brick structure that had few redeeming architectural qualities.

In 1854 Prebendary William Poole was appointed vicar of Hentland, and around 1870 he embarked on a scheme to beautify Hoarwithy Chapel, financing the project by setting aside rent income from properties he owned elsewhere.

Poole was a friend of architect John Pollard Seddon, who had designed a new school in Hentland, and around 1874 he asked Seddon to replace the old brick chapel with a much grander one. Seddon, whose other major works include the University College Wales, Aberystwyth and the Sir William Powell Alms Houses in Fulham, worked mainly in the Gothic Revival style that was so popular in Victorian times, but at Hoarwithy he drew on an entirely different inspiration; the architecture of the Byzantine empire. 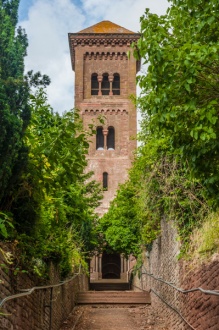 With the aide of George Fox, who designed the ornate decorative scheme, Seddon created an astonishing new church in Italianate style. Rather than destroy the earlier brick chapel he completely encased it within a complex structure including a campanile and external colonnades.

The colonnades alone are reason enough to visit Hoarwithy; these are composed of twin columns with beautifully carved capitals reminiscent of the Herefordshire School 12th century carvings found around the county (most notably at Kilpeck and Shobdon churches).

The interior is sumptuous, modelled after the Cathedral at Le Puy, in France, with an apsidal chancel raised on steps, with a half-apse to either side. The focal points are the white marble altar studded with precious stones and a similar white marble pulpit with panels of green porphyry.

The pulpit was modelled after that of Fiesole Cathedral, outside Florence, while the hanging lamps are copied from those at St Mark's in Venice. 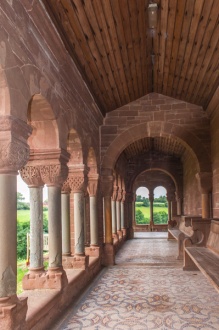 The chancel is supported on tall marble columns set on bases of porphyry, and the domed ceiling is decorated with an amazing mosaic showing Christ in Majesty. This was installed by a team of Italian craftsmen from St Paul's Cathedral. The capitals of the chancel columns are exquisitely carved in intricate Byzantine designs.

The richly decorated choir stalls are all carved by hand, using oak from Poole's own family estate at Homend, near Ledbury. The beautifully carved stalls and prayer desk depict local saints, particularly Dubricius, the patron saint of Hentland church. Carved panels show Dubricius exorcising the Devil, in the form of a bat.

The hanging lamps are replicas of those used in St Mark's Cathedral in Venice. The original heating system was a hypocaust, essentially the same as that used by the Romans, though this has now been converted to a modern heating system. The overall effect of the interior is awe-inspiring; the Italian style is so unexpected in a quintessentially English landscape. 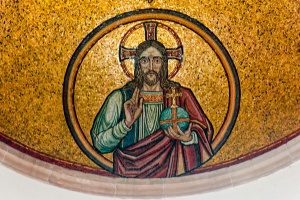 The chancel dome mosaic of
Christ in Majesty

Work on Hoarwithy Chapel took decades to complete; it began around 1874 and was not finished until 1903, though most of the construction took place in the 1880s. This is even more remarkable when you consider that at the time Hoarwithy was being created, Gothic Revival style, in all its various permutations, reigned supreme in England.

The church stands on a steeply sloping hillside, just where the road begins to rise, heading north from the centre of Hoarwithy towards Dewchurch. From the road, it is difficult to see more than just a bit of fence and a church signpost and gate.

There is no parking area so you have to park along the verge by the gate. Through the gate, a path climbs steeply and you see the amazing Italianate tower rising ahead of you. It isn't immediately obvious where the church entrance is; as I discovered after 10 minutes of unsuccessful walking around the exterior, you have to pass along the arcaded porch to the end, then turn right, through a heavy doorway, into the west porch. It is easier than it sounds!

Author John Leonard, in his wonderful book 'Churches of Herefordshire and Their Treasures', calls Hoarwithy 'the most exciting Victorian church in Herefordshire', and I find myself in complete agreement. He goes on to call Seddon's church a work of 'startling originality', and again I have to agree.

Walkers on the Wye Valley walk will be familiar with Hoarwithy Chapel, as the path passes close by the church. 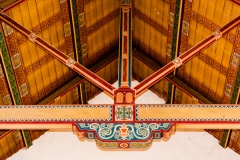 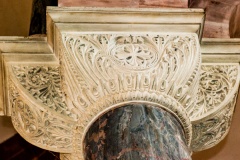 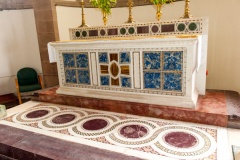 The high altar and mosaic floor 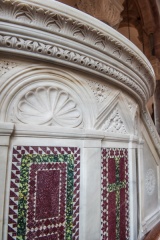 Detail of the pulpit decoration 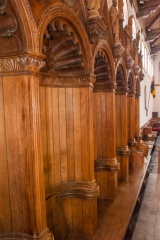 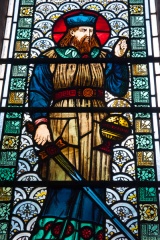 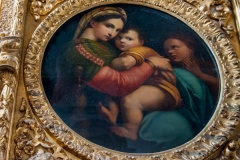 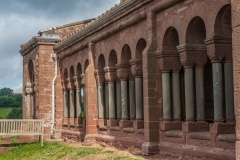 Exterior view of the north colonnade 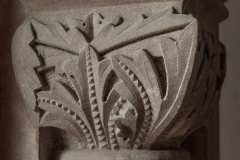 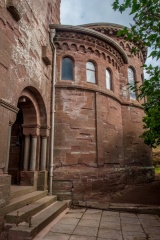 The apse and east end