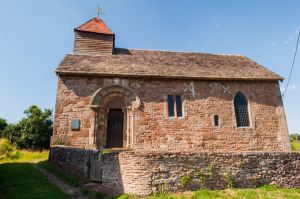 Yatton Chapel
A beautiful country church set in a farmyard. Yatton Chapel is most notable for the wonderful 12th-century carved tympanum over the south door, featuring a Tree of Life symbol. The doorway is typical of Norman work, with a rounded arch decorated with chevrons, and carved side columns.

There are three orders of shafts, with carved capitals on the inner and outer shafts. The inner shafts, which support the tympanum, have traditional chevron patterns arranged vertically, while the outer capitals are carved with semi-circles and volutes (a spiral scroll pattern).

At the top of the doorway is a round arch decorated with chevrons. The overall carving pattern is a delight, though not nearly so detailed or elegant as more celebrated Herefordshire School sites like Kilpeck (but then, few churches anywhere in England can compare to Kilpeck).

Lest that sound like a criticism, let me make clear that I loved the Yatton carvings; the tympanum and doorway decoration are a wonderful example of 12th-century work, well worth a visit to see.&

The building is a single cell, consisting of a nave and chancel with no division between the two - and no floor, for the interior flooring is simply hard-packed earth. There is a south entrance (no porch) and a small west bell tower.

The interior is unfurnished, and the walls are unplastered, allowing the bare bones of the building to show. There are 13th-century windows in the north, south, and west walls. A large 16th-century window was later inserted in the south wall, and the east wall was rebuilt in 1704 (look for the initials I.F. and the date above the topmost window). 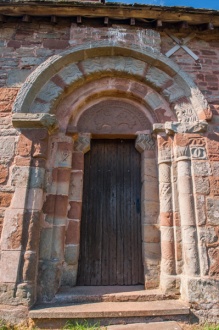 The most intriguing feature of the interior is the timber-framed roof, which is supported on well-worn long wooden posts rather than stone pillars. The timbers were inserted in the early 17th century. There are two very simple fonts; one is original to the chapel, of 12th-century date.

The other, also dating to the 12th century, was brought here from Brobury Church when the latter closed. The screen from Yatton has been removed and reused in the newer church less than a mile to the east (at grid reference SO636304).

When the new All Saints church was built at Yatton in 1841 the chapel fell into disuse. It is no longer used for regular worship, and is in the care of the Churches Conservation Trust.

Author John Leonard (Churches of Herefordshire and Their Treasures) calls Yatton Chapel the most rewarding church in the care of the Churches Conservation Trust in the county of Herefordshire, and you won't find many people who would disagree.

The name Yatton translates as 'place at the pass', or gate. The settlement goes back to at least the time of the Domesday Book of 1086, when 'Getune' was in royal hands (though the records complain that someone unnamed was taking lands and revenue from the king. From the Crown, it passed to private owners including the Lact family, who seem to have owned most of Herefordshire in the early medieval period.

After that, it was owned by the Bohun, Mortimer, and Seymour families, until in 1564 John Seymour sold Yatton to John Scudamore (see Holme Lacy). In 1841 (at the time the new church was built) it was sold to Lord Ashburton and later to George Clive. Somewhere during the medieval period, Yatton became a chapelry under Much Marcle.

Finding the chapel is quite a challenge. I set my satnav for HR1 4TD, which took me to Churchfield, on a minor lane just east of Crossway. Immediately west of the cluster of cottages at Churchfield is a farm track leading down a hill to Chapel Farm. There is no sign for the church, and a very clear 'Private' sign discouraging you from even considering the lane. Yet this is where you need to go, though it would be helpful to actually have a sign!

In consideration of the 'Private' warnings I left my vehicle at the top of the lane and walked down the track. The farmhouse and chapel will come into view after a few minutes, and it should take no more than 10 minutes to walk down to the chapel.

At no point are there any signs, but the chapel is very clear, to the right of the farm buildings, inside a low stone wall. The location is absolutely idyllic, and the chapel more than lives up to its billing; the tympanum is a delight; more worn than, say, Rowlstone or Kilpeck, but still a wonderful example of Norman art. 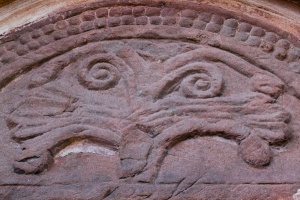 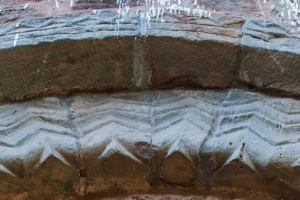 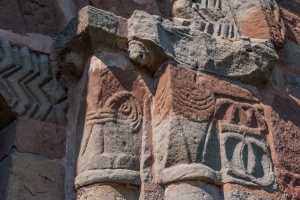 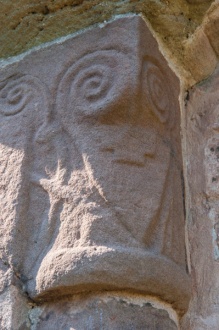 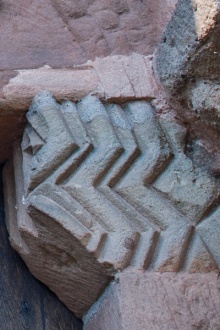 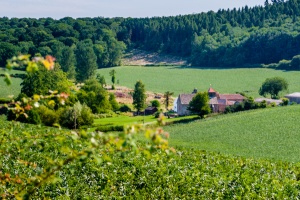 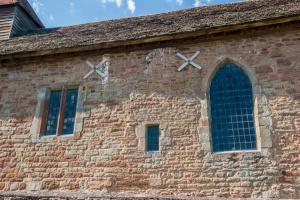 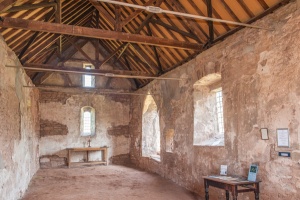 Inside the chapel, looking east 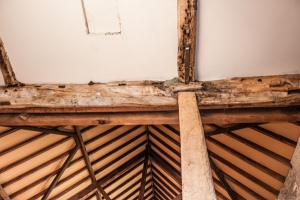 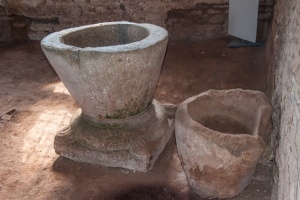 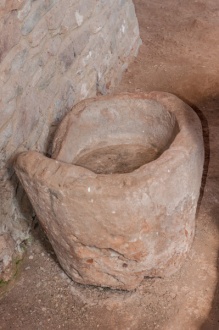 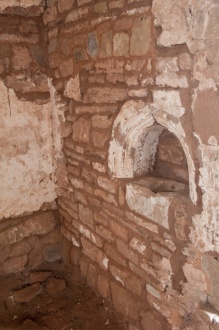 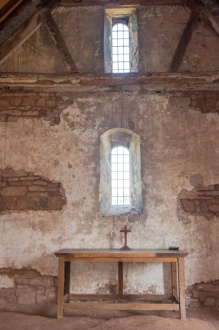 More self catering near Yatton Chapel >>