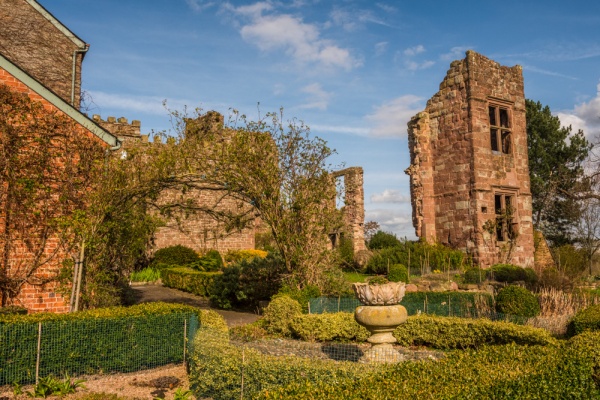 A restored 12th-century Norman castle in the Welsh Borders, set in lovely gardens beside the River Wye. The castle was built of local red sandstone in the latter half of the 12th century, replacing an earlier wooden palisade in the traditional Norman motte and bailey plan. The location was chosen carefully to guard an important crossing of the Wye, on the main road into Wales. 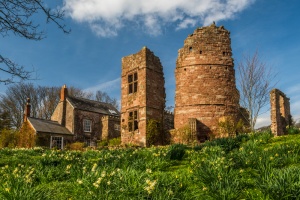 Ruins of the Tudor manor house

The first owners of Wilton Castle were the de Longchamps, who retained the estate for only 3 generations before it passed by marriage to the de Grey family, who held the castle for over 300 years. Much of the ruined castle we see today dates from the early years of the de Grey ownership.

The castle forms a rough square around an inner courtyard, with a fortified tower at each corner. You can still see the nesting boxes built into the thickness of the inner castle walls to encourage pigeons, which formed a major part of the medieval diet.

The remains of a 16th-century manor house stand beside the castle, overlooking the gardens. It seems likely that the manor was built in part with stone made available by knocking down the south-east tower of the castle. That suggests that the castle was no longer needed for defence and the de Greys wanted a much more comfortable residence.

Unfortunately, the de Grey family fell on hard times and had to sell Wilton to a relative, Charles Brydges. The Brydges must have loved their new possession, for they called it their 'fayre sweet dwelling'.

Now we come to a fascinating bit of family history which determined the ultimate fate of Wilton Castle. At the outbreak of the Civil War, the lord of the manor, Sir John Brydges, refused to declare for either Parliament or the king, perhaps hoping to protect his family from the conflict.

The local Royalist populace was so enraged by Sir John's neutrality that they burned the house to the ground while the Brydges family were at church. Sir John immediately threw his support behind the Parliamentary cause!

Another version of the story, related by the current owner on our visit, is that the house was burned at the instigation of Sir John's own cousin, a staunch Royalist. If true, it emphasises just how tumultuous the Civil War was, with families broken apart and relatives pitted against each other. 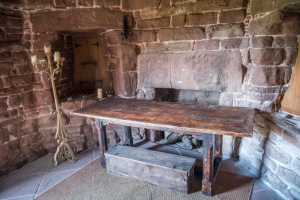 Inside the North-west Tower

In 1731 the Wilton estate was sold to Guys Hospital in London. The Hospital trustees built a new house and let it out to tenant farmers. The manor house was extended in the 19th century, and it continued to be lived in by local farmers, until it was sold to a financier named Charles Clore in 1961.

When the castle came for sale again in 2002 it was snapped up by Mr and Mrs Alan Parslow. Mr Parslow, the current owner told us how he and his wife were simply passing through Ross-on-Wye when they heard about the castle sale. They made a snap decision and bought it. Over the intervening years, they have gradually restored it bit by bit, aided by grants from English Heritage. As part of the arrangement with English Heritage the owners open the castle to the public for 28 days each year.

One highlight is the restored North-west Tower, notable for external garderobes on each floor. Look out for the chimney cap, an original piece of stonework found in a pile of rubble on the tower floor. The East Tower has hundreds of nesting boxes for pigeons inserted into the interior walls. One of the most interesting parts of the castle is the roofless Elizabethan manor house, with its large window openings.

As for the attractive gardens, these cover two acres, and slope down to the river bank. Amid the gardens you will find old-fashioned roses, shrubberies, and gravel paths leading past colourful herbaceous borders. The gardens are enclosed by the medieval castle moat, and use the ruins of the castle walls as home for roses, vines, and other climbing plants.

The location is stunning. We came on a sunny afternoon in March, when spring daffodils filled the moat, and the spire of St Mary's church in Ross-on-Wye was visible through the trees that lined the riverbank. The remains of Wilton Castle are not extensive, but the combination of the 13th-century walls, restored towers, Elizabethan manor, and the wonderful location make this one of the most enjoyable Marcher castles to visit. 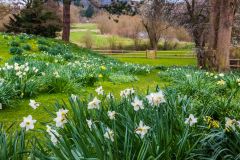 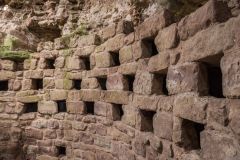 More self catering near Wilton Castle >> 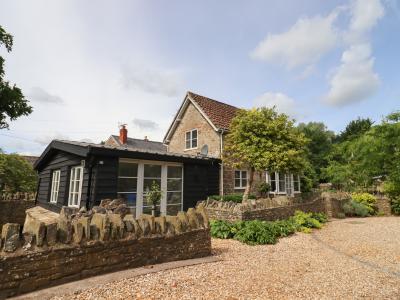 This idyllic detached cottage rests in in Ross-on-Wye, Herefordshire and can sleep six people in three bedrooms.
Sleeps 6