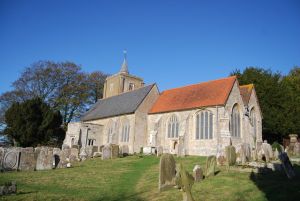 East Peckham, St Michael's Church
A church deserted by its village, St Michael's stands alone on a hilltop, well removed from the village of East Peckham it was built to serve. Over time the settlement moved closer to the river, leaving the church in isolation. The church stands amid beech trees overlooking the valley of the Medway, with views to the Weald.

St Michael's dates to the Norman period, with 13th and 14th-century rebuilding. The nave pillars are 14th century, as are the nave arches, while the south porch dates to the following century. The west tower is topped by a small spire which boasts a weathervane bearing the date of 1704.

The hood moulds protecting the windows boast a fascinating collection of carved heads, including several figures sticking their tongues out.

The church interior features memorials to members of the Twysden family, a royal coat of arms of George III dated 1740, and small sections of medieval stained glass.

There is a fairly plain 15th-century piscina and an extremely plain octagonal font of the same period.

Perhaps the most interesting historic feature is a memorial brass to William and Margaret Wheatenhall. William served as Sheriff of Kent in 1526 and is depicted in his robes of office. Even older is a memorial to Richard Etclesley (d. 1426) who left a chalice to the church when he died.

Near the altar is an unusual cast-iron slab with an inset cross. There are several very good 17th and 18th-century ledger slabs, including an ornately carved one to Edward Paston of Beckhall and his granddaughter Elizabeth Wheatenhall, who died in 1658. A more modern memorial is to John Norwood, who received the Victoria Cross after he rescued a fellow soldier under heavy fire during the Second Boer War.

The south chapel was originally a chantry chapel, but after chantries were suppressed during the Reformation it housed the family pew of the owners of Royston Hall.

There are some extremely good wall monuments, including one to Elizabeth Cholmely, who died in 1699, and a lovely tablet to Thomasin Warham (d. 1687). The epitaph tells us that she 'lived with great piety and virtue'.

There is a ring of six bells, the oldest of which was cast in 1747.

East Peckham church is no longer in regular use and is cared for by the Churches Conservation Trust. It is normally open daily.