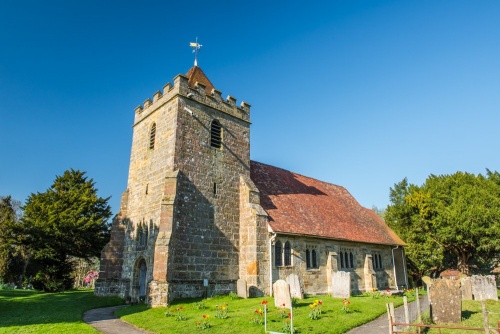 St Thomas Becket is a small Norman church in a rural setting in the Kentish Weald. The most interesting feature of the church is the 13th-century wall paintings that dominate the north wall of the nave. The wall paintings were uncovered during restoration in 1927.

The paintings depict Biblical stories, including Cain and Abel, and the entry of Jesus into Jerusalem. The paintings were created in two phases, the first around 1200 and the second about 50 years later. Among the painted frieze and Biblical scenes, you can make out a pair of consecration crosses.

Perhaps the most interesting and visually striking wall painting is in the splay of the Norman window in the north wall. Here you see Cain killing his brother Abel on the west splay and God remonstrating with Cain for his actions in the east splay.

East of the window you can see a depiction of the Last Supper, and beyond that is a scene showing The Betrayal and Arrest of Jesus, with St Peter cutting off the ear of Malchus. Several of the figures are extremely vivid and well-preserved.

On the northern face of the chancel arch, you can see much late 16th-century decorative patterns underlining a section of Biblical text.

The tower had to be restored after a fire in 1639, and the chancel and south wall were rebuilt in the 19th century. The church is built of red sandstone under a tile roof. The layout is very simple, with a nave, chancel, north vestry, and a short west tower. The tower is just one stage high, with a battlemented parapet and pyramidal roof. 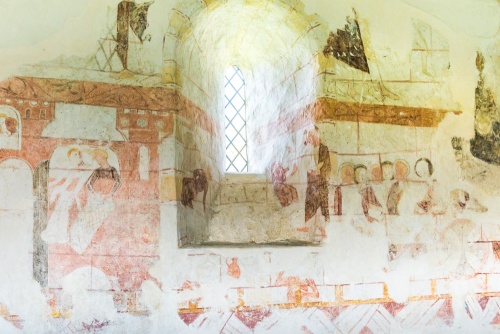 One fascinating story associated with Capel church relates to the ancient yew tree in the churchyard. Not only is the church dedicated to St Thomas Becket, but Becket himself is said to have preached under the yew tree!

Another version of the story says that Becket preached in the church itself. Either way, it seems that there is a very close connection between the church and the saint.

The church was almost certainly in existence before 1170, when Becket was murdered in Canterbury Cathedral. It seems as though it never served as an actual parish church but was instead a chapel of ease for Tudeley parish. The community that grew up around the chapel became known as 'Capel', a reference to the chapel.

We do not know the original dedication, but the chapel was rededicated to Thomas Becket after his canonisation. It stands on the ancient pilgrim route from Chichester to Becket's shrine at Canterbury.

The chapel and rectory were held by the Knights Hospitaller of St John - the religious military order that served as the forerunner of the St John's Ambulance. Capel was one of 65 dependent houses under the main Hospitaler centre at Clerkenwell in London. It was linked to the Order's preceptory at nearby West Peckham. The preceptory provided a parish priest to minister to the passing pilgrims, and probably to provide health care to the sick. 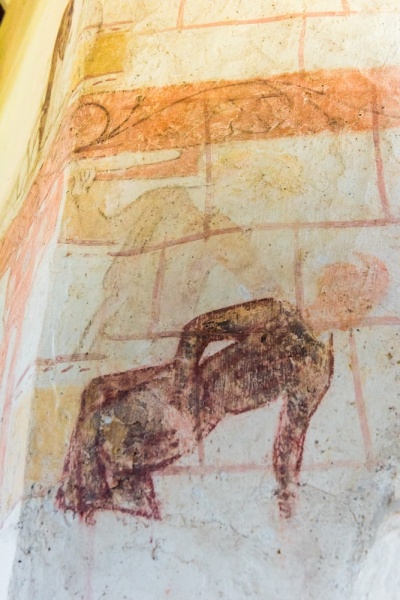 We know that there was a chantry chapel here in the late 15th century, for in 1491 William Webb left money for a secular priest to say prayers 'to syng and to rede in the church of Capel for the helth of my sowle'.

The church features 14th-century stonework and a very fine timber roof built to a crown-post design. The communion rails date to 1662 are a beautiful example of 17th-century craftsmanship. The central entrance gate still has its original hinges and latch. It is inscribed 'Michael Davis 1662'.

Over the west nave wall is a royal coat of arms to George II, painted on wood in 1739. It is flanked by painted boards with the Lord's Prayer and the Apostle's Creed.

The pulpit is Victorian, incorporating 17th-century timbers, but the octagonal font is probably medieval and is topped by a finely carved Jacobean cover decorated with finely carved decoration. The stone altar table is modern, replacing a 17th-century version that was stolen.

The richly coloured east window was installed in 1905 as a memorial to Captain Leslie Martin. The Martin family lived at Addlestead House and Hextall House in East Peckham and owned a huge estate covering almost 500 acres of land in Capel parish. Leslie Martin was born in 1848.

As was common for a younger son in those days, he joined the military, purchasing a commission in the Lancers. He left the Army in 1879, married and settled near Dublin. He died there unexpectedly in 1888 at just 40 years old, and his body was brought from Ireland to this tiny chapel near his family home for burial.

Curiously, there is just one memorial in the church, dated 1834 and commemorating Thomas Martin and his wife Elizabeth. The Martins were the parents of Captain Leslie Martin whose life is commemorated in the east window.

There are also brass plaques to the dead of WWI and WWII, and over the tower arch is a royal coat of arms to George II. 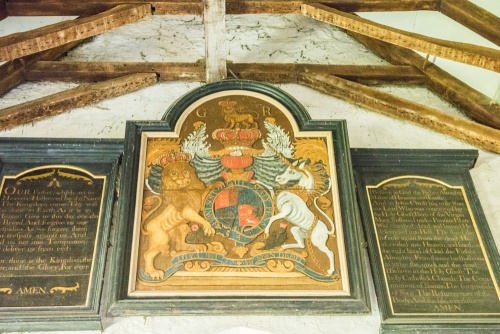 In the churchyard is a 16th-century chest tomb, though the inscription is too worn to be legible. Another table tomb dates to 1768, and there are a large number of 17th and 18th-century gravestones.

The church is no longer used for regular worship and is in the care of the Churches Conservation Trust. It is usually open during daylight hours.

It is fascinating to compare Capel church to the nearby church at Tudeley, just over a mile away and also cared for by the Churches Conservation Trust. Capel is very much a product of the medieval period, while Tudeley, though it has medieval origins, is famous for its magnificent 20th-century stained glass windows designed by Marc Chagall. 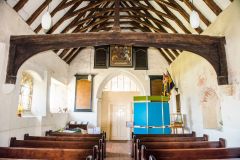 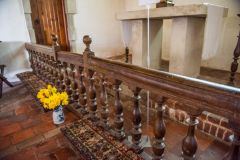 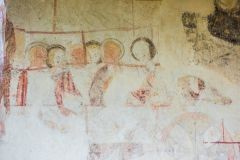 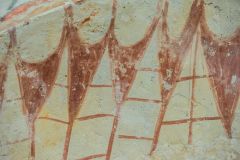