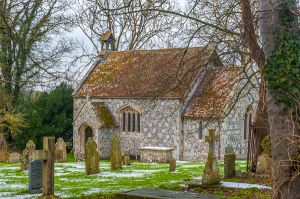 A small 13th-century church above the River Till, St Andrew's retains its original 13th-century font. The building is constructed of flint and stone in an attractive chequerboard pattern, and consists of a nave, a very small chancel, south porch, and wooden bell turret. Rollestone's chief claim to fame is that Jane Seymour, later to become one of Henry VIII's six wives, was baptised here.

The parish of Rollestone dates to at least the time of the Domesday Book when it was called Winterbourne. By the 13th century, the name had changed to Winterbourne Rollestone, and by the following century, the Winterbourne part had been dropped. In 1242 Roger de Quency, Earl of Winchester, held the manor.

When he died it was split between his three daughters, then almost immediately assigned to his daughter Elizabeth, and through her to her husband Alexander Comyn, Earl of Buchan.

From Buchan, it passed to Humphrey de Bohun, Earl of Hereford, but by 1428 it had been acquired by the crown as part of the Duchy of Lancaster. It was assigned to tenants and later passed to the Earl of Cardigan (of Light Brigade fame) before it was sold to the Heathcote family.

The church stands apart from the village, on a sloping hillside looking over the river valley below, just above the large 18th-century manor house of brick.

Beside the church is an attractive Georgian rectory. The location is superb, and even though you can hear the sound of traffic on the A360, it seems a timeless place, with a churchyard full of snowdrops in early Spring.

The first written record of a church at Rollestone comes from 1291 so we are fairly safe in assuming it was built earlier in that century, perhaps at the time the manor was owned by the Earl of Winchester. In 1302 the Prior of the Order of St John of Jerusalem (the Knights Hospitaller) had the right to present the rector. The Order retained the living until the Dissolution of the Monasteries under Henry VIII.

It served a very small village; in 1428 there were only 10 householders in the parish and by 1901 only 8 remained. That explains why the church is so small; the nave is just over 34 feet long and the chancel not even 10 feet. The church was completely rebuilt in 1845.

A persistent local legend says that Jane Seymour, future wife of Henry VIII, was baptised at St Andrew's church in 1508, as her family journeyed from Southampton to London.

According to the Churches Conservation Trust, who look after the church, this often-repeated bit of local history is probably an error; a misreading of a baptismal record of another Jane Seymour in 1637 - more than 100 years too late!

It does seem odd, though, that they would downplay the idea based on baptismal records when the earliest known records for the church come from 1654!

The Seymour family owned nearby manors, possibly including Rollestone, though at the time of her birth it seems the Rollestone estate was owned by the Skilling family. Given that her family owned land nearby it is certainly possible Jane came here, and not beyond possibility that she worshipped at the church, though there doesn't appear to be any evidence that she was actually baptised at St Andrew's church.

The church was rebuilt in the Victorian period but retains much of its medieval character. The interior is whitewashed, with the exception of the chancel arch, and features pews with Jacobean end carvings, and heraldic stained glass dating from the 18th century. Reset windows in the chancel date from the original 13th-century church, as does the plain font at the west end of the nave.

There is a mix of 14th-16th century windows in the nave, and the attractive timber roof is 16th century. The oak communion table and font-cover date to the 17th century. Set into the chancel floor are 3 ledger stones; one to John Froud (1716), another to William Miles (d. 1722) and the third sadly too worn to read. The north window is from about 1370 and contains Georgian stained glass crests, one of the inserted upside-down.

The chancel arch is Victorian work, with a pair of carved heads terminating each side of the archway; one represents Queen Victoria, the other Prince Albert. There is a war memorial plaque commemorating a pair of local soldiers who perished in WWI. Private Edward Rose died during the 3rd Battle of Ypres in 1917, while Private Frederick Mills died in 1916 from battlefield wounds.

The church is now redundant, no longer being used for regular worship. Interestingly, the oak benches were brought to Rollestone from another redundant church at Haydon in Dorset. Getting There

If you simply follow the postcode your satnav will probably take you to a point halfway along Rollestone Road, which is incorrect. Access is off the A360 on the hill heading south out of Shrewton, signposted to the rectory. There is no obvious sign to the church anywhere that I could spot. 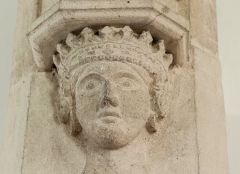 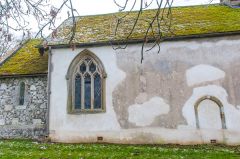 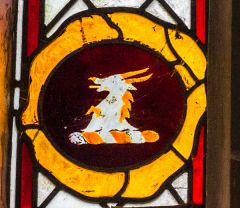 The Stonehenge Inn and Carvery - 5.3 miles
Durrington, Wiltshire
From: £40.00