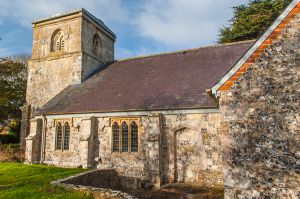 A much remodelled Norman church in a quiet village location, St Mary's features quite a lot of 17th-century work in the interior. The church was built sometime before 1179. The nave may be 12th century, and the chancel and tower date to the 13th century.

The church is composed of a nave, chancel, south transept, and a squat west tower. The walls of the chancel and nave were rebuilt in a fascinating mix of chequerboard flint and flagstone. Above the tower arch is a painted cartouche with the date 1637. It is thought that this refers to the date that a west gallery was installed.

The gallery, unfortunately, is long gone, as is the church congregation, for St Mary's has become a redundant church, not used for regular worship.

One of two redundant churches in the care of the Churches Conservation Trust clustered around Shrewton. One is beside the Rollestone manor house on the hillside above the River Till, while the other is in the valley bottom, next to Maddington manor house.

Thankfully, there was no-one home and I spotted a path from the patio beside the manor house to the churchyard. It was only after I got to the church that I spotted the way I should have come; a path beside the drive to the Old Vicarage. There was no obvious sign to direct visitors. I did see a 'Church Open' sign leaning up against a wall inside the vicarage gates, but there's no way a visitor could be expected to see it.

The most striking exterior feature is the lovely tower, built in three stages at the west end of the nave. The main entrance is, somewhat unusually, on the north side of the nave. On the south side of the nave is a 14th-century chantry chapel, most obvious if you walk around the outside of the church before entering. The porch and south aisle date to 1603; the date is inscribed over the door.

Most of the interior furnishings date to 1853 when TH Wyatt was called in to oversee a restoration at the same time as he worked on nearby Shrewton church.

In the chancel is a memorial to John Maton, lord of the manor at Maddington, who died in 1827. Another Maton memorial commemorates the children of Emily Maton, including six children who died aged 11 or under. It is a sobering reminder of just how high child mortality rates were in past centuries. Another interesting memorial is to the Gilbert family, from the Joseph Gilbert, 1759, to Sarah Gilbert, who died in 1807.

Though most of the interior furnishings are Victorian, there is some interesting medieval stonework stored under the tower, including a crocketed spirelet. Also stored under the tower is a wooden parish bier, used for carrying coffins to the churchyard for burial. The font is a beautifully carved piece of 19th-century stonework, with intricate quatrefoil patterns.

You could spend several enjoyable hours exploring historic churches around Shrewton, and St Mary's is a definite highlight. There's no one outstanding historic feature, but the church and its beautiful surroundings make a perfect picture. 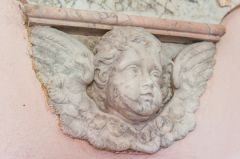 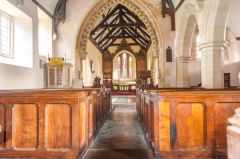 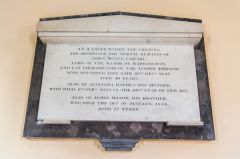 The Stonehenge Inn and Carvery - 5.4 miles
Durrington, Wiltshire
From: £40.00