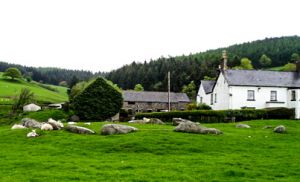 Tyfos Stone Circle (Ring of Tyfos)
Fourteen recumbent stones of this Bronze Age circle are still visible, lying lengthwise around a raised bank on a low rise beside the River Dee. Moel Ty Uchaf is nearby.
Sometimes called Tyfos Uchaf, this circle is made up of 14 recumbent stones on the inner edge of an earthwork bank. Within the circle, on one side, can be seen an elongated, raised mound, which has been interpreted as all that remains of a cairn, or burial mound. The circle is about 17 metres across.

The Royal Commission on the Ancient and Historical Monuments of Wales (RCAHMW) calls Tyfos a ring cairn, and suggests that the recumbent stones are simply kerb stones rather than an actual stone circle. There is no evidence that the stones ever stood upright, but it does seem that several have been removed. The circle lies within a larger circular area of levelled ground, so it seems likely there was much more to the site than just a stone circle.

The stones average between 1 and 2 feet tall. It is possible that the stones were erected first, and the cairn added later. Since you can see the Moel Ty Uchaf site (though not the stones themselves) from Tyfos, it begs the question of whether the two sites were related.

You can clearly see the stone circle from the road, but for a closer look you can ask at the farmhouse for permission to enter the field and wander amongst the stones.

More self catering near Tyfos Stone Circle (Ring of Tyfos) >> 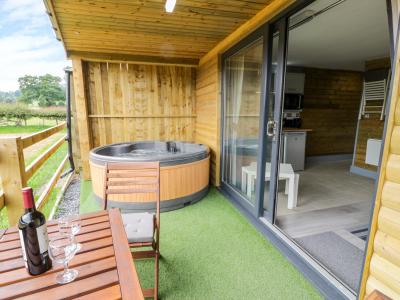 This delightful lodge rests in Llandrillo, Wales and can sleep up to four people in one bedroom.
Sleeps 2