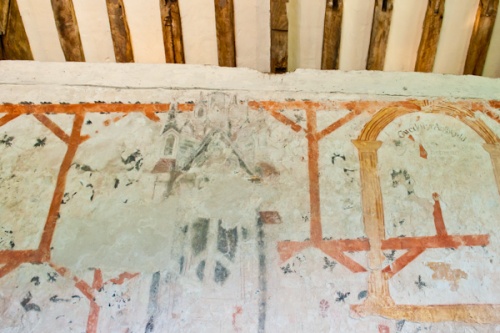 It is quite amazing that Llangar church is not more popular as a visitor attraction, because it is, without doubt, one of the most interesting historic churches in the north of Wales. But perhaps it is just as well that hordes of tourists do not descend on the ancient riverside church, situated on a sloping site on the east bank of the River Dee near its confluence with the Alwen about a mile south of Corwen. Without the visitors it retains an air of peaceful slumber and no little mystery.

No one quite knows how old Llangar church is, but we know the site was in use for thousands of years, for an ancient standing stone is incorporated into the south wall, just west of the entrance porch. 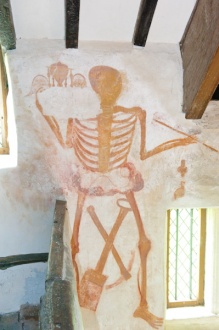 Wall painting of a skeleton

The Church of the White Stag

The original Welsh name of the church was 'Llan Garw Gwyn', which loosely translates as 'church of the white stag'. According to legend, when builders came to build the church, it was at a site down the valley.

Every night the work they had done during the day was mysteriously destroyed. In despair, the builders turned to a local hermit, or holy man, who told them to hunt for a white stag, and build the church where they first found it. Then they would need to track and kill the deer, and mix its blood with the mortar used to build the church.

Of course, similar stories are to be found in many parts of Britain! The builders hunted for a white deer and spotted it on the current church site. They hunted down the deer, first wounding it and then tracking it across the river before finally killing their prey.

What is intriguing is that nearby place names suggest some cultural memory of events surrounding this tale. The place the deer finally was killed is still known as the Hill of Slaughter, and the boundary of the parish was said to be the path the deer took while trying to evade capture.

Whatever the origins of the church, the result is wonderful. A wall painting on the south wall of the church shows the stag, though, to be fair, the painting depicts it as a red deer, though that may be because it is painted on a whitewashed background!

Ah, now we come to the wall paintings, which are one of the main reasons for visiting Llangar. Until Cadw took over the restoration of Llangar the paintings were unknown, for, like many churches, the interior walls had been whitewashed during the Reformation to remove idolatrous decoration. When Cadw's restorers began work they quickly uncovered a series of paintings that cover most of the interior. 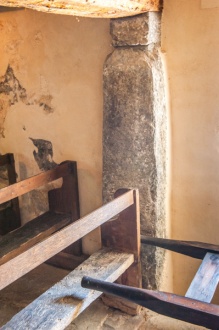 A standing stone set
into the south wall

These range from simple graffiti proclaiming the names of previous vicars, to wonderful designs on the south wall that appear to depict the Seven Deadly Sins. However, the most widely known painting is the one that faces you immediately upon entering the church; directly opposite the south door is a large skeleton, with two infants lying within its hip girdle. The skeleton carries a spear in one hand and a winged hourglass in the other, and beneath it are a spade and pickaxe.

At the west end of the church is a gallery, used by musicians and the choir. In the gallery is an unusual four-sided wooden music stand.

The interior of the church is filled with a very attractive selection of pews, including simple benches and more elaborate box pews for more important local families. Immediately beside the door is a very simple stone font, dated on stylistic terms to at least the 11th century.

The pulpit is an extremely odd affair, composed of three distinctly separate stands, each made to perform a different aspect of the religious ceremonies. At the north-east corner of the church, set into a cupboard in the wall, is an old leper squint, a narrow window placed to allow lepers, who were not allowed inside the church, to view the high altar.

The overall effect of the interior is simply wonderful; Llangar is not a grand church, rather it is a simple rural church that retains some marvellous historic features. I can highly recommend a visit.

Mind you, getting to Llangar church is not straightforward. The church is poorly signposted for a start - there is an old sign on the B4401 Corwen to Cynwyd road, about a mile south of Corwen, but it is small and easy to miss.

Look for a large layby on the east side of the road and park there. Cross the road and follow the track downhill (signed to Stamp House). Pass through two gates and the church will appear to the right (north).

Go through an ancient stone lych gate and up the uneven path. You can view the interior through the windows on the south wall of the church, but to really get the full effect you'll need to time your visit for one of Llangar's rather odd opening times.

When we visited, that entailed first visiting Rug Chapel, a mile away at the junction of the A55 and A494. A ticket to Rug Chapel also gives you free entry to Llangar. The attendant at Rug told us when there would be someone at Llangar. Currently, that is Wed-Sat between 12:30-14:00, but please don't rely on those times, for they may change. To be safe, contact Cadw at Rug Chapel first!

Visits are seasonal only and need to be specially arranged through the Cadw representative at Rug Chapel. See the Cadw website for current opening details. 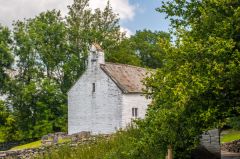 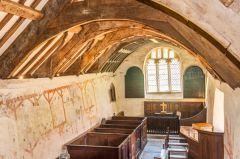 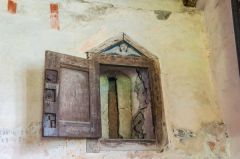 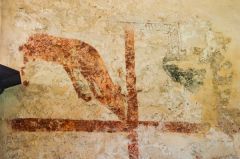 More self catering near Llangar Church >>