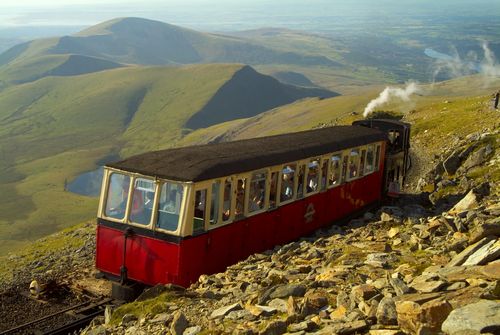 This mountainous region of northern Wales has served as a training base for Mount Everest Expeditions, but don't be intimidated by that; there is plenty here for the less ambitious walker and climber. Llanberis Pass boasts some of the most challenging climbs in Britain, but also a host of easier options, including guided walks and landscaped trails with posted info on the history, farming, and industrial heritage of this area.

The drama of Snowdonia is provided by its high peaks and steep, plunging valleys, but there is also an abundance of open moorland and miles of sandy beaches along the coast.

Snowdonia has a history of industrial use for mining slate, copper, and gold, and there are remains of this activity everywhere, but it also served as a natural fortress during the Middle Ages when the princes of Wales used it as a refuge in their ongoing battles with the English.

The park is good territory for birdwatchers, with the curlew, raven, buzzard, kestrel, merlin, sparrowhawk, and peregrine just some of the species to be found. By night polecats and pine martens prowl, and there are otters in the rivers and lakes that sprinkle the park. 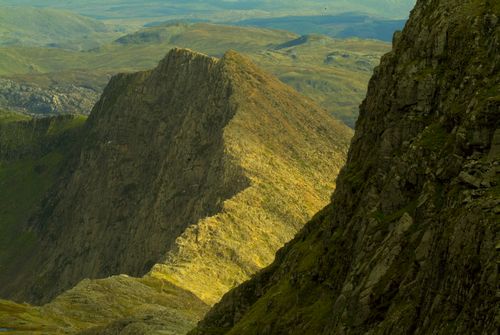 The spectacular view
from Mount Snowdon

The route from Betws y Coed through Pen y Pass to Llanberis offers spectacular views and access to several popular walking paths around Mount Snowdon. To the west, the route south from Caernarfon through Beddgelert and north to Dolwyddelan is quite lovely and offers excellent views over the valley.

Ascending Mount Snowdon
There are two ways to reach the top of Mount Snowdon. You can ride in comfort on the Mount Snowdon Railway from Llanberis, or you can follow one of the five main trails that reach Snowdon's summit from different sides.

The most popular approach, and one of the easiest climbs, is the path from Llanberis itself. For much of its route, the trail follows beside the track used by the Mount Snowdon Railway. Expect the ascent to take about three hours, and, despite what the guidebooks say, a solid two hours to descend.

The shortest, and probably steepest climbs, starts opposite the youth hostel at Pen y Pass. There is a car park at Pen y Pass, but it can fill up very quickly in the summer months. Alternatively, you can park at the bottom of the pass and take a park and ride bus to the trailhead. Once at Pen y Pass there are two trails to choose from.

The Miners Trail is the one I've personally taken. It offers quite easy walking past several old miner's buildings and mountain lakes to the base of Snowdon. From there the climb is quite steep and rough in places, but the reward for your effort is wonderful views from final ridge leading to the summit of Snowdon. Allow 1 1/2 hours for the ascent from Pen y Pass. 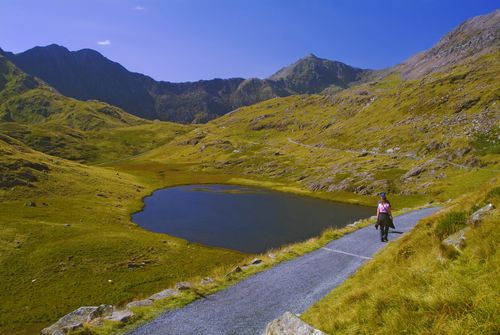 Bala Lake: the largest lake in Wales is a popular watersports centre, and a narrow-gauge railway skirts the southern shore.
Castell-y-Bere: a ruined castle in a lovely valley location, built by Llewelyn the Great.
Coed-y-Brenin: a managed forest of some 16,000 acres, dissected by numerous walking trails.
Dolbadarn Castle - Built by Llewelyn Fawr (Llewelyn the Great) on the shore of Llyn Padarn
Dolwyddelan Castle - 13th-century fortress guarding the route to Snowdonia
Rhaiadur Ddu: (Black Waterfall) - a spectacular falls near the village of Ganllwyd
Snowdon: the highest peak in England and Wales. The summit can be reached by 5 paths or the Snowdon Mountain Railway - a memorable trip.
Swallow Falls - spectacular waterfall near Betws-y-Coed