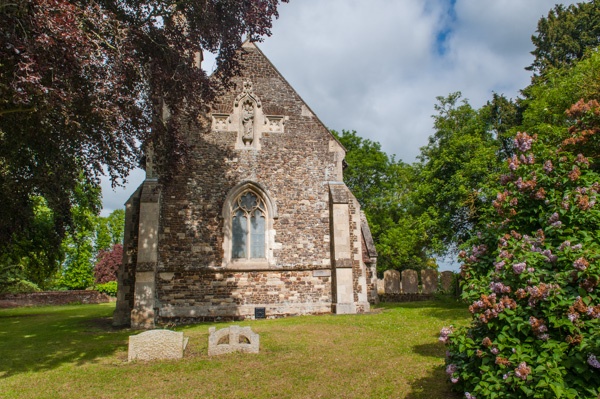 At first glance, Potsgrove church might appear Victorian, but looks can be deceiving; the church dates to the 14th century, and incorporates bits of a much earlier Norman church on the site. The nave and chancel are combined into one, with the addition of a south porch.

The 15th and 16th-century roof is worth appreciating. The slender, rounded bell turret, offset to the south side of the building, is also beautifully proportioned.

The church was rebuilt in Arts and Crafts style from 1880 by John Sedding. To his credit, Sedding reused the existing medieval materials wherever possible. So it is that we can still appreciate the 14th-century rood screen and stained glass of the same date. The screen has been quite obviously repainted during the Victorian restoration, but the woodwork is largely original. Sedding was also responsible for the spirelet over the bell turret.

The west window has glass from the St John's Mission Chapel, now demolished. On the north side of the chancel is a low 14th-century tomb recess with an ornate canopy. Opposite is a sedilia and piscina from the 1880 restoration. The font is also 1880 and is made of Purbeck marble.

Hanging on the nave wall are a pair of 15th-century memorial brasses. One is to Richard and Joan Saunders (1535) and the other to William and Isabel Saunders, dating to the late 16th century and in poor condition.

The windows date to the 19th-century restoration and have very little original medieval stonework remaining. On either side of the south porch are carved corbels depicting the Bishop of Ely and the rector at the time of the restoration, Rev. EN Coles. The Bishop attended the church reopening in 1880.

Over the interior of the north doorway are three painted panels that originally formed a reredos behind the altar.

The church is no longer used for regular worship and is in the care of the Churches Conservation Trust. It is usually open daily to visitors and was open when we visited. 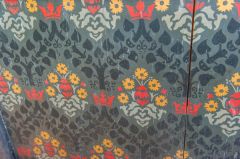 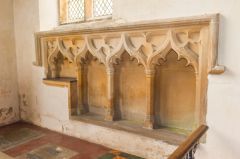 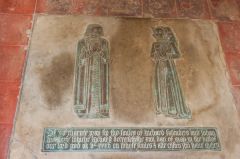 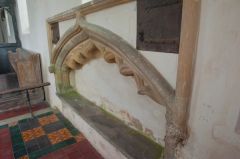