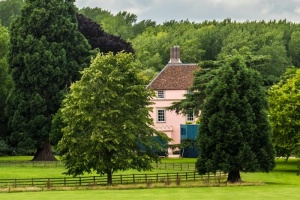 Toddington Manor offers a modern mixture of walled garden, herb garden, rose garden, and lakeside walks. The garden is a modern restoration begun by Sir Neville and Lady Bowman-Shaw in 1979.

There is a lovely pleached-lime walk, a nut walk, and an enjoyable mix of old favourite shrubs, vines, and flowers.

Within the grounds are the remains of a 13th-century manor built by Sir Paulinus Pever, a royal steward under Henry III. The Manor estate has an extremely long history going back to well before the Norman invasion in 1066.

The Manor stands on the site of a 16th-century house built by the Cheney family. Sir Thomas Cheney gained the estate in 1559 when he married Anne Broughton, the daughter of Sir John Broughton of Toddington. Cheney was an influential politician in the court of Henry VIII and over time amassed vast estates in Bedfordshire and Kent.

His son Henry Cheney built an opulent manor house at Toddington, and it was here that he was knighted by Elizabeth I in 1563. The manor house was huge, standing three storeys high, with imposing corner towers.

When Lord Cheney died without heirs the Toddington estate passed to the Wentworths of Nettlestead. Baroness Wentworth had a tumultuous life; she had an affair with Charles II's illegitimate son, the Duke of Monmouth, and in 1683 the Duke hid at Toddington Manor after the ill-judged Rye House Plot to kill the king was discovered.

Baroness Wentworth followed Monmouth into exile, but returned to Toddington and died at the Manor in 1686, one year after Monmouth's execution.

Toddington Manor should not be confused with a house of the same name near Cheltenham, Gloucestershire.

Note
The garden is open only on selected days throughout the year - please check openings to avoid disappointment!

More self catering near Toddington Manor