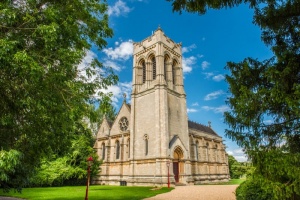 St Mary the Virgin Church was built by the 8th Duke of Bedford in 1865-68 in a location between the village and his stately home of Woburn Abbey. The church originally had a tall spire, but this proved unsafe and was removed in 1890.

St Mary's takes its inspiration from the French Gothic style but is blessedly restrained -- at least by the standards of Victorian Gothic. Note the gargoyles and other strange creatures peering from the tower.

The design is by architect Henry Clutton, who also worked on Cliveden House in Buckinghamshire and Battle Abbey in Sussex. Clutton had just finished working on Tavistock church in Devon, also for the Duke of Bedfordshire. He had recently won a design competition for a cathedral in Lille, France, but the cathedral was not built. Woburn's new church was something of a competition; a French cathedral in miniature.

The chancel is raised above the level of the nave, which is remarkably simple and subdued in colour. The organ was donated by the 11th Duke in 1903. The east window boasts a stained glass window by CE Kempe, inserted in 1894 to commemorate the 10th Duke.

Beneath it is a gilded reredos made at Oberammergau. In the Lady Chapel is a 17th-century Italian painting of the Virgin and Child, donated by one of the Dukes.

The church was designed with a crypt for members of the Russell family of Woburn but it was never used; the Russells preferred to be buried in the church beside their manor house at Chenies in Buckinghamshire.

The church stands immediately opposite the village parking area on Park Street. 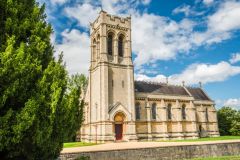 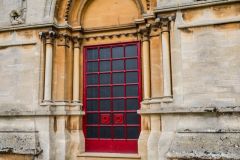 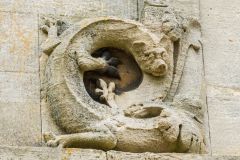 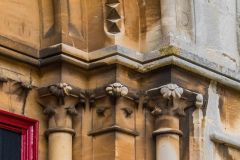