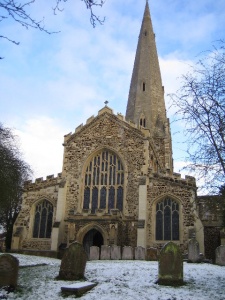 All Saints dates to the 13th century, but even so, it is the second church to stand on this site. The most immediately striking feature is the spire, which soars upwards to 190 feet above the ground. The sundials are from the 16th century, though the gargoyles cavorting about the exterior were added in mid-Victorian times.

Before entering the church, spare a glance for the west door. The wood of the door is modern, but the fanciful iron braces are original 13th-century work, created by Thomas of Leighton, who was also responsible for the screen at the tomb of Queen Eleanor in Westminster Abbey.

In the interior, the eagle lectern is worth noting; it dates to the original building of the church in the 13th century and is one of the earliest of this common lectern motif in England. The 14th-century choir stalls may have come from St Alban's Abbey. Look for the carved misericords.

One of the most intriguing interior features can be found upon the south-west pier, in the shape of a fascinating carving of an elderly woman waving a spoon at a man. The most common interpretation is that the figures depict a couple known as Simon and Nellie, who are the traditional inventors of the 'Simnel' cake.

Simnel cake is a rich fruit cake traditionally given by children of all ages to their mothers on the 4th Sunday of Lent, which was called Mothering Sunday. Alternatively, the word "simnel" may be derived from the Latin for a fine flour.

All Saints was badly damaged by a fire in 1985 but has been sympathetically restored, and the 15th-century nave roof, with its carved wooden angels, has been returned to its former glory. The roof was the gift of Alice de la Pole, Duchess of Suffolk, who owned Leighton manor from 1465-75.

More self catering near Leighton Buzzard