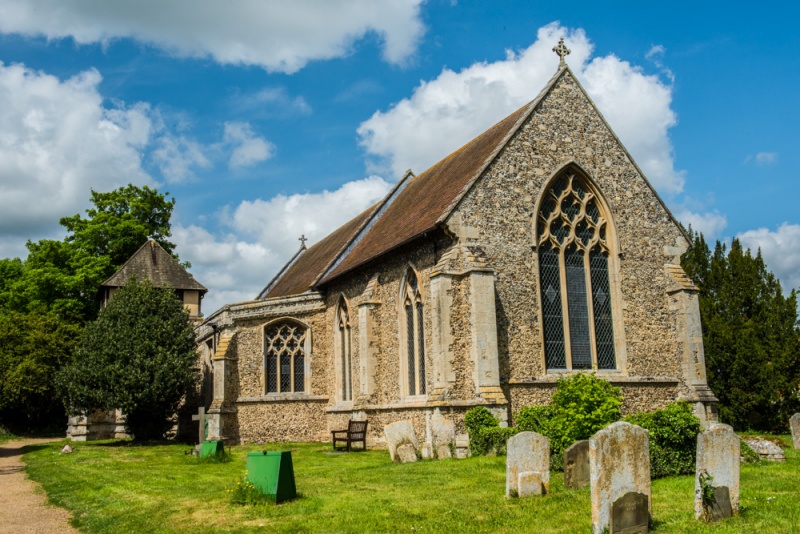 Two historic churches once served the Suffolk village of Stanton. One, scarcely visible from the busy A143 road the bypasses the village, is St John's, now a roofless ruin on the north side of the road. The other is All Saints, a beautiful 14th-century building in the centre of the village.

Though the building we see today is very much a product of the 14th century, it stands on the site of a much earlier Saxon building mentioned in the Domesday Book of 1086.

Unusually, the tower is not at the west end of the nave, but rises above the south porch. It is one of just 22 south-west porch towers in Suffolk. The tower used to be much higher, but the belfry collapsed in 1906. It was not until 1956 that a wooden bell frame was built to house the church's four bells, which chime rather than ring.

Inside the porch are four stone benches used for holding official meetings. 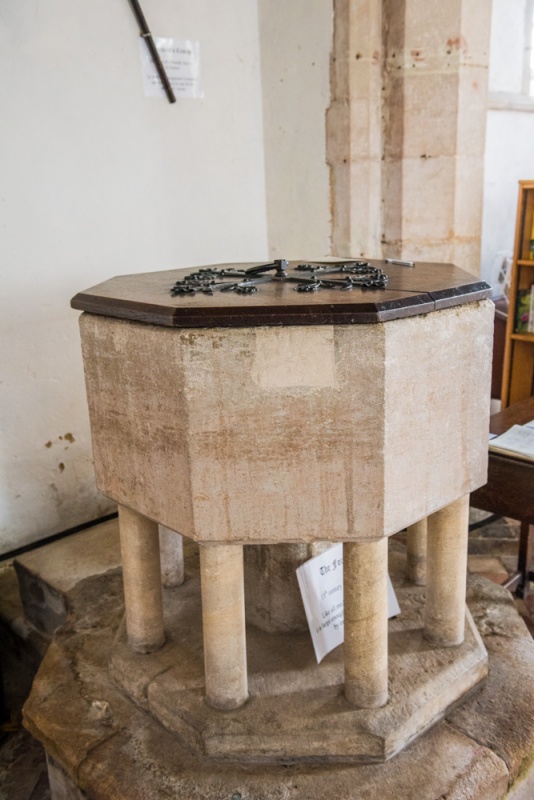 At the west end of the nave is a plainly carved 13th-century font. On the wall near the font are shepherds crooks, the insignia of The Ancient Order of Shepherds. The Order was a 'friendly society', offering medical and social care to its members in the days before the NHS and government social services. When the Society was disbanded the crooks were brought into the church to serve as Christian symbols of Christ as 'The Good Shepherd'.

The south aisle was built in the late 14th century, possibly by the de Stanton family, lords of the manor, and it retains 16th-century roof timbers. A buttress supporting the tower projects into the aisle, and in a niche cut into the buttress is a Norman font bowl re-used as a holy water stoup.

In the south wall is a tomb recess intended to house an effigy to Lord Hervey de Stanton, Chancellor to Edward II and founder of Michaelhouse at Cambridge University. However, Stanton was not buried here when he died, but in Cambridge.

If you look closely amid the carved foliage decorating the tomb recess you can make out small faces amidst the foliage decoration. These were probably meant to represent Green Men, a form of pagan fertility symbol adopted by the medieval church as a symbol of Christian rebirth. 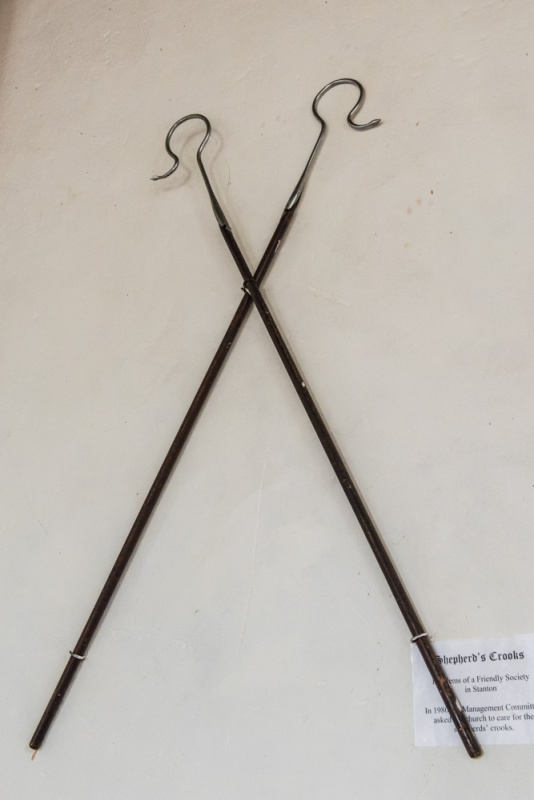 Official shepherds crooks of 'The Ancient Order of Shepherds'

In the south wall of the sanctuary is a three-seat sedilia, or clergy seat, formed from the window sill, and beside it is a 14th-century piscina. In the nearby east window are fragments of medieval stained glass. The centre light of the window depicts Holman Hunt's famous painting, 'The Light of the World'.

On the south-east chancel wall is a tablet to Rev. George Bidwell, and by the vestry door is a brass plaque to Rev. Swan Dudding. Toger Bidwell and Dudding served the parish for a combined 106 years, from 1811 until 1917. Memorial to Bidwell's wife and daughters are on the north-east wall and on the sanctuary floor respectively.

The large west window is Victorian echoing the style of the original medieval east window. On the wall over the blocked north doorway is a royal coat of arms to George III, brought here from St John's church when it became redundant. Also brought from St John's church is a charity board, painted in 1840.

All Saints is a lovely church, full of historic interest, and well deserves a visit, especially if you can explore nearby St John's at the same time. 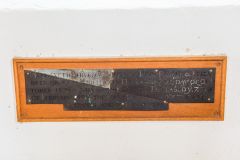 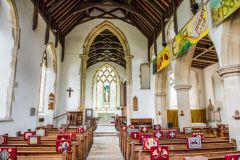 More self catering near Stanton, All Saints Church

More bed and breakfasts near Stanton, All Saints Church