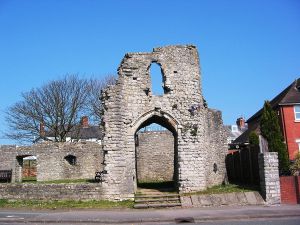 Barry Castle
Bits of a gate and wall are all that remain of this 13th century fortified manor, seat of the de Barry family. The site originally boasted earthwork defences, later augmented by the addition of stone buildings, a great hall, and a gatehouse defended by a drawbridge and portcullis.
Barry was not a castle in the traditional sense, but a strongly fortified family home. The Barry's built their manor to replace an earlier earthen ringwork on the same site. The first structure consisted of a courtyard measuring about 30 metres long by 28 metres wide.

Within a curtain wall were two stone buildings. Nothing of these structures now remains. In the early 14th century a large hall and an imposing gatehouse were added on the south side of the courtyard. These are the buildings whose remains we can see today.

Grooves on either side of the gatehouse arch indicate that the passage was defended by a portcullis. The approach to the castle was by way of a drawbridge across a moat. Partial remains of a chamber above the arch suggest that it served as a chapel in addition to housing the portcullis mechanism. The remains of the hall are far less substantial. Finds on the site suggest that it was roofed by slate tiles imported from Cornwall.

More self catering near Barry Castle >>