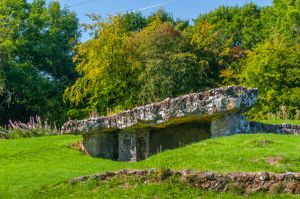 Tinkinswood Burial Chamber is one of the best-preserved chambered cairns in Britain, topped by the largest capstone (15 x 24 feet and 40 tons in weight). The cairn is wedge-shaped, though the actual chamber is rectangular. The tomb is fronted by a forecourt of drystone walls. From the forecourt a passage leads to a single chamber.

Within the chamber were found bones from at least 50 people buried during the Neolithic period. It seems likely that the cairn was used for ceremonial purposes right through the Bronze Age. Pieces of broken pottery and shaped pieces of flint were found with the bones.

When the chamber was excavated in 1914 a pillar was inserted to support the roof, and the distinctive herringbone stonework of the forecourt was added to the original supporting walls.

Standing beside the tomb you can easily make out the elongated shape of the mound, with an external revetment wall set with stones.

Tinkinswood has collected a few fascinating folk legends over the years. The best known of these tales say that anyone spending the night here on the eve of May Day, Midwinter, or St John's Day (23 May) will either go mad or become a poet. To the south of the mound is a group of boulders said to represent women turned to stone for dancing on the Sabbath day.

Tinkinswood is well signposted from nearby roads. There is a small layby large enough for 1-2 cars by the side of the road. From there a trail leads through a gate and across 2 fields, climbing a small rise before the cairn comes into view near a modern electricity pylon.

Despite the intrusion of the electricity lines, the cairn seems blissfully remote, and extremely impressive, though some of that effect is down to the 1914 'enhancements. The burial chamber with its enormous capstone is extremely impressive, though, and the site is well worth a visit. You can easily combine a visit to Tinkinswood with a trip to nearby St Lythan's Burial Chamber. 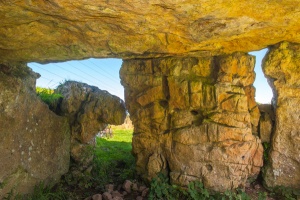 Within the burial chamber 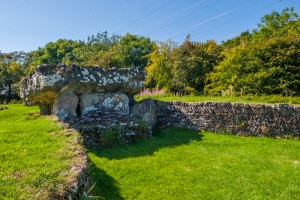 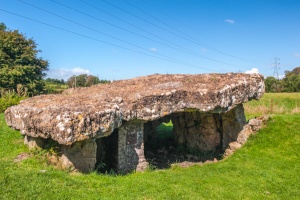 The capstone from the rear 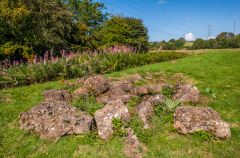 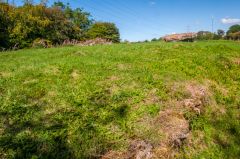 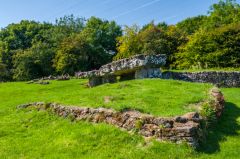