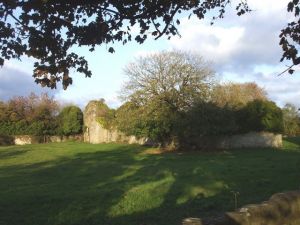 Penmark Castle
The castle once belonging to the Umfravilles family. One part of a 13th century stone curtain wall survives along with a semi-circular tower. The first mention of a castle at Penmark dates from 1307, but it seems likely that the castle existed as early as the 12th century.

The castle consists of a pair of enclosures with an oval shaped inner ward within a stone curtain wall. One tower remains, with scant evidence of a second tower. Within the enclosure are foundations of other ruined buildings, including a later 18th century barn.

The outer enclosure measures roughly 60 metres by 50 metres, and it butts against the churchyard to the south. In the north-west corner is a ruined dovecote.

More self catering near Penmark Castle >>