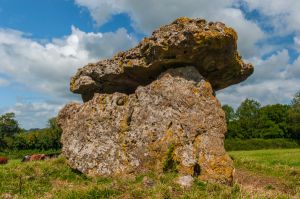 St Lythans Burial Chamber
A striking chambered tomb of unusual height, in the style known as Cotswold-Severn. The capstone measures 14 feet long x 10 feet wide. It would have been originally covered by a cairn of stones or earth. The tomb was built sometime around 4000 BCE, and is located close to the well-known Tinkinswood chambered tomb.

The single chamber that remains is only part of what was once a much larger burial site. It was originally surrounded by a mound, similar to that at Tinkinswood, but you cannot really make out any remains of the mound at all from the ground.

Examination of the site suggests that the original mound stretched 80 feet, and was 35 feet wide, wit the chamber we se today occupying the eastern end of the monument.

The chamber consists of 3 upright stones topped by a huge capstone weighing about 35 tons. Not quite as large and heavy as the enormous capstone at Tinkinswood, but it would still have been quite a sizeable undertaking to put it in place!

Remains of human bones and pieces of pottery were found at St Lythans, but no modern excavation has taken place, so we do not know how long the site was in use.

In Welsh the name of the chamber is gwal-y-filiast, or a kennel for a female greyhound. The name may derive from an Arthurian tale about Culhwch and Olwen, but there's nothing Arthurian about the burial chamber itself!

The burial chamber stands on a low rise in the middle of a farm field. There is a small layby on the roadside, and a short path to the site, which is visible from the roadside. There really isn't much to see beyond the uprights and the capstone, but it is still a compelling sight. Do take the time to visit Tinkinswood, only a few miles away, if you're visiting St Lythans. 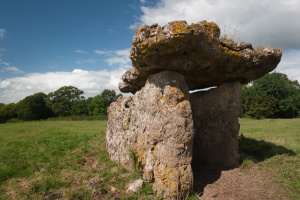 Another view of the chamber 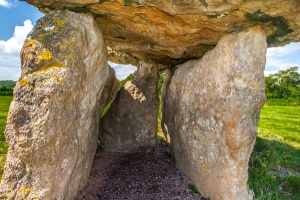 Looking into the chamber 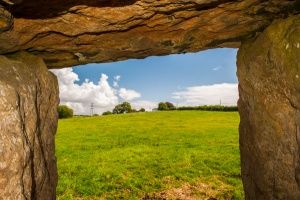 Looking out from inside the chamber 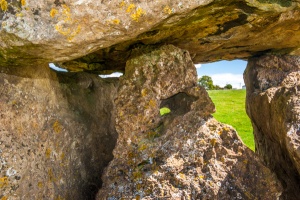 The upright stones from behind
the chamber opening