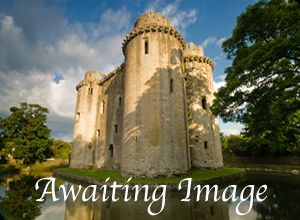 Dinas Powys Castle
There are remains of earthwork fortifications at Dinas Powys dating as far back as the Iron Age. A bank and ditch were erected in the post-Roman period, and a more extensive bank was shored up with stone in the 11th century to create a defensible position for a timber and earth fortress. Still more earthworks were added in the 12th or 13th century.
The first mention of a castle in historical records dates to about 1200, and it was in ruins by the 16th century. Excavations on the site have found medieval coins dating from the 13th to the 15th century.

The castle consists of a rectangular court enclosed within stone walls, about 68 metres by 32 metres. There would originally have been a hall and domestic buildings of masonry and timber along the walls. Remains of a rectangular tower stand at the north-west end, linked to the outer face of the enclosure wall. The tower may actually predate the walls. Beyond the tower is an earlier counterscarp defence.