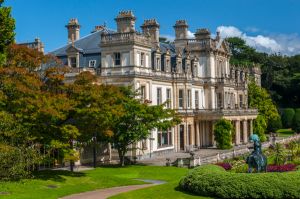 An exquisite Edwardian garden covering 65 acres surrounds the stately Victorian mansion of Dyffryn House. The Grade-I listed gardens are laid out in a series of cosy garden rooms mixed with more formal lawns and a large arboretum featuring trees from across the globe including several 'champion' trees. Within the gardens are a lily pond, Roman garden, swimming pool garden, round garden, Japanese garden, vine walk, an arboretum, and cactus collection.

After several decades of being closed to the public some of the state rooms of Grade-II listed Dyffryn House are now open once more, allowing visitors to catch a glimpse of the Victorian splendour behind the ornamented Italianate facade.

The gardens at Dyffryn are primarily the work of Thomas Mawson, created for a wealthy businessman named John Cory, and his son Reginald. Cory made his fortune in the coal industry, and poured money into creating a luxurious house set in a lavish landscape of garden rooms, each with its own unique character. The garden rooms are set within a larger landscape of pleasure grounds including wide lawns punctuated with water features and dotted with statuary.

Vale of Glamorgan Council has owned the house and gardens since since 1996 but they have been recently leased to the National Trust on a 50 year lease, allowing the Trust to restore the house and gardens and allow visitors to glimpse the historic property in its full glory. Originally only the gardens were opened to the public, but gradually more and more of the house is being opened as well.

As of this writing there are 5 rooms open to the public, on both the ground floor and first floor. Most of the rooms have seating near the windows, allowing visitors to relax and enjoy views across the gardens, just as the Cory owners of Dyffryn would have done. One of the first floor rooms is the Plant Hunter Room, with information about the garden and stories of hunting for rare and unusual species of plants. 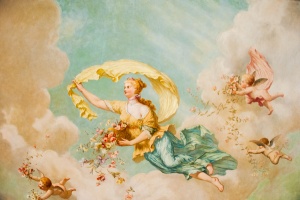 An example of the painted ceilings 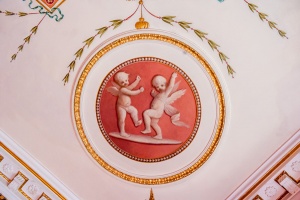 Ceiling in the Crimson Room 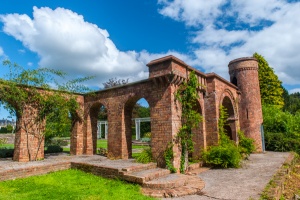 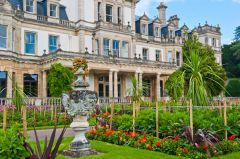 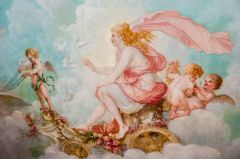 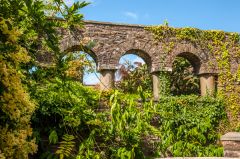 More self catering near Dyffryn Gardens and Arboretum >>

More bed and breakfasts near Dyffryn Gardens and Arboretum >>