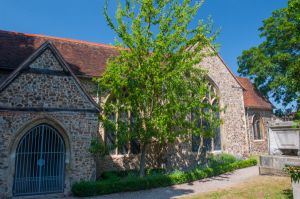 An ancient church in the centre of Colchester, now redundant. The walls incorporate Roman bricks, but the earliest evidence of construction dates to the 11th century. The bulk of the church is 14th century, including the nave arcades and the chancel roof.

The building stands partially over a Roman street, and beside a later Saxon road, indicating perhaps that it was originally erected during the Saxon period. The tower was badly damaged during the siege of Colchester in the Civil War and was never rebuilt, so that today it stands as a romantic, truncated ruin.

The wagon roof of the chancel is worth viewing. It has some beautiful timberwork and very nice decorative carving, including the face of a Green Man. The roof was covered up for many years until revealed during restoration work by Sir Giles Gilbert Scott in the 19th century. Scott was actually not working on St Martins at all but was employed on rebuilding St Nicholas church on High Street. 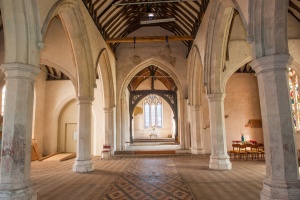 During his stay in Colchester, Scott visited St Martins and was so struck by the church that he brought the Royal Archaeological Institute here to see it, and paid for the chancel ceiling to be removed out of his own pocket, revealing the medieval timbers.

Plaster was removed from the nave and aisle, revealing a 'Doom' wall painting over the chancel arch. This was whitewashed around 1543, and though the whitewash helped preserve it, only fragmentary pieces of the scene remain visible.

The south porch contains very nice Jacobean woodwork, and there are Roman bricks incorporated into the west doorway to the tower. These bricks may date to the 2nd century AD.

The interior is relatively bare, as the building was used as an art and performance centre after it was declared redundant in 1953. The absence of interior furnishings allows you to appreciate the medieval architecture, particularly the 14th and 15th-century windows, with their intricate tracery. There is a very striking 15th-century timber arch across the chancel, supporting a crown-post upright. At the peak of the arch is a Green Man carving, foliage issuing from its mouth. 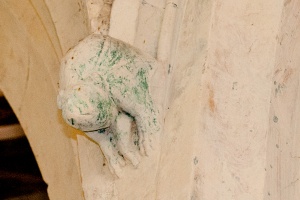 There are fascinating carved corbel heads decorating the three-bay nave arcade. The vestry door is another intriguing feature, the doorway is 14th century, and the door itself is 19th century, but it incorporates fascinating 17th century carved panels showing garlands of flowers.

Against the north wall is a richly carved recess which may have been used as an Easter Sepulchre. There is a two-seat sedilia on the opposite wall, and a 13th-century grave slab set in the chancel floor.

Among the memorials is one to William Cole, a merchant, who died in 1759, but the most moving memorial is a small roundel on the east wall, to three-year-old Wiliam Murray, who died in 1840.

In the churchyard is a grandiose 19th-century sarcophagus to William Sparling, a solicitor and twice mayor of Colchester (d. 1816). 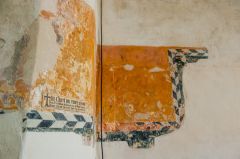 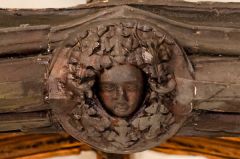 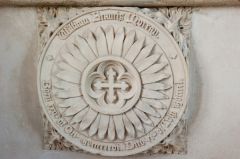 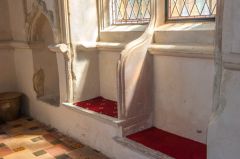