Colchester, St Mary at the Walls 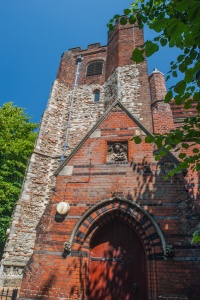 St Mary at the Walls

St Mary at the Walls is primarily a Victorian church, but the tower is 15th century, and it is this tower that is the most interesting part of the church. The site may have been used for a church since the Saxon period, as pre-Norman graves have been found near the site.

The name may cause some confusion until you realise that the church stands immediately beside the old Roman town wall of Colchester. One of the major surviving gateways through the wall - the Balkerne Gate - is just a stone's throw from the churchyard.

The earliest church here was recorded in 1206 and until 1857 it was under the jurisdiction of the Bishop of London. A chantry was established here in 1328 by Joseph Powell, who gave money for 2 priests to pray for him, his parents and benefactors, and 'all faithful Christians'.

When the chantry was dissolved by Henry VIII in 1535 the money was used to found a grammar school. St Mary's was a poor parish, a point emphasised in 1440 when the rector, one Robert Lardener, was granted permission to hold 2 livings because St Mary's was so poor. The church was substantially rebuilt in 1714 by rector Robert Middleton. 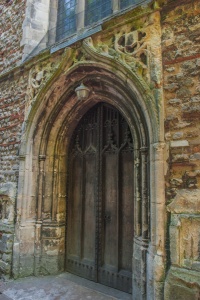 The west doorway
of the tower

The most famous rector was probably Rev. John Irvine, who caused a stir when he denounced the construction of a huge new water tower at the foot of his rectory garden in 1882. Irvine denounced the tower as a 'Jumbo', a reference to a popular elephant at London Zoo that had been sold over public outcry to circus entrepreneur PT Barnum.

The 'Jumbo' Water Tower was built over Irvine's objections, and stands a stone's throw from his former church. The church was almost completely rebuilt n 1872 so that the only really substantial part of the building that is not Victorian is the 15th/18th century tower.

Within the church are several memorials from the 18th and 19th centuries. One of the oldest is that of John Rebow (d. 1699). There is a memorial tablet to a former rector, Thomas Twining (d. 1804). In 1976 St Mary's was made redundant, and since then it has become the home for the Colchester Arts Centre, so opening times generally depend on performance times.

St Mary's has seen its fair share of historic drama. It was here during the reign of Queen Mary that Protestants were burned at the stake. Colchester saw more burnings than any place in England outside of London. 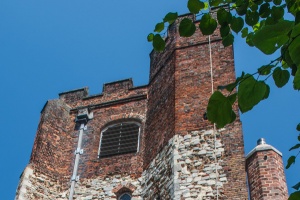 18th-century repairs to Civil War
damage to the tower

Colchester was held for the king during the Civil War. Parliament besieged the town in 1648, an attack that lasted 12 weeks. During the siege, a one-eyed gunner named Thompson hauled his 'saker' (a small cannon) to the top of the tower of St Mary's church.

The vantage point allowed him to direct damaging fire onto the besieging troops under the command of Lord Fairfax. The Parliamentary gunners concentrated their fire on St Mary's tower, and eventually hit the unfortunate Thompson and sent the gunner and his weapon falling to the ground.

The damage caused by Parliamentary guns is evident; when the tower was finally repaired in 1750 the builders used red brick, which stands out clearly from the reused Roman materials in the lower part of the tower.

A later twist on the tale of Thompson the one-eyed gunner is the idea that the story was the origin of the nursery rhyme about Humpty Dumpty. There doesn't seem to be any truth to the tale that Thompson was the 'egg' who 'had a great fall', but it makes a nice story.

While you can't depend on St Mary's being open if you drop by on a tour of Colchester, its location between the Jumbo Water Tower and the Roman Balkerne Gate makes it worth mentioning if you are touring historic Colchester.

Nearest Accommodation to Colchester, St Mary at the Walls:

More self catering near Colchester, St Mary at the Walls

More Hotels near Colchester, St Mary at the Walls

More bed and breakfasts near Colchester, St Mary at the Walls