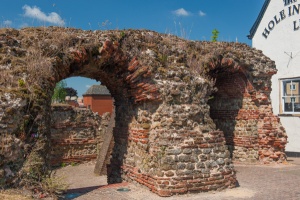 In AD 60 Boudicca, Queen of the Iceni, rebelled against the newly ensconced Roman rulers of Britain. One of her first acts was to destroy Colchester - the Roman town of Camulodunum, capital of the new Roman colony of Britannia.

The Roman legions of Camulodunum were away on campaign, and Boudicca was almost unopposed. After moving on to sack St Albans and London, she was eventually defeated, but the ease with which she had taken Colchester alarmed the Roman authorities. They set about building a wall around the town of Camulodunum.

The town was encircled by a high defensive enclosure, with 5 gates giving access through the wall. The core of the wall is simple rubble, faced with carefully arranged courses of septaria stone (a compacted clay) and bricks.

The septaria was brought from the coast near Walton-on-the-Naze and Harwich, while the clay for bricks was dug locally. Much of Essex was heavily forested in Roman times, so there was a good supply of wood for firing the clay to make bricks. They also used material left behind after Boudicca's army had destroyed dwellings and civic buildings in Colchester. 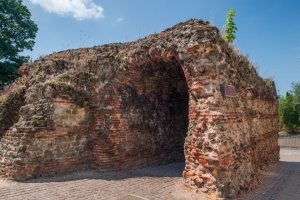 Not all material for the wall were available locally; they had to bring the lime for making mortar from Kent. In total the Roman wall of Colchester is 2800 metres long, 6 metres high, and an average 2.4 metres wide. It took an estimated 40,000 tonnes of building material to complete, and was constructed by legionaries and local Britons. Construction probably began around 70AD and finished around AD 90.

Piercing the east side of the old Roman town walls of Camulodunum is the Balkerne Gate, the oldest surviving Roman gateway in Britain and the main entrance into the Roman town. One side of the gate opening is now filled by the aptly-named Hole in the Wall pub, but in Roman times the entire opening was spanned by a pair of large arched openings with a smaller passage for foot traffic on either side.

To the south of the main gateway passage is a smaller guardroom accessed down a short step. We think there was once a triumphal arch here, built to honour Emperor Claudius and built between 50-60AD. When the wall was built it simply incorporated the existing archway into the wall structure. 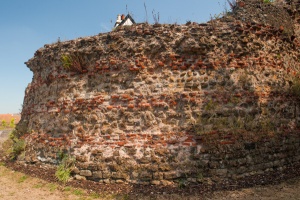 It survived because it was infilled later in the Roman period, when the main gateway was moved further south, to the Head Gate (at the junction of Headgate and Southway). Just south of Southway, by the police station, are the foundations of the oldest known Romano-Christian church, built beside a graveyard just outside the town walls.

The area around the Balkerne Gate is one of the best-preserved sections of the Roman wall, and it gives you a very good chance to examine the construction close up. It is fascinating to see how the Romans incorporated parallel courses of brick into the width of the wall to stabilise it. These courses follow a very precise pattern; usually five courses of septaria stone alternating with four courses of brick and tile.

Just east of Vineyard Steps, leading down from Eld Lane and Sir Isaac's Walk, is a large car park extending almost to Queen Street. Running along the north side of the car park is a long stretch of well-preserved Roman wall. It is fascinating to see how later Roman building on Eld Lane are sitting directly on top of the wall. 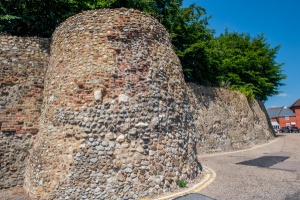 At the base of the wall is a Roman drain, which carried waste water into a town ditch. The Romans were very conscious of hygiene, according to their own standards, which were certainly higher than the standards of Saxon and medieval Colchester!

The wall follows the curve of Priory Street, past the ruins of St Botolph's Priory (English Heritage), in the south-east corner of Roman Colchester. You can easily see Roman bricks built into the ruined priory arches and walls.

The wall is not in a very good through this section, but there are several medieval bastions (small projecting towers) built into the thickness of the wall. The bastions were erected at the time of the Peasant's Revolt in 1380. 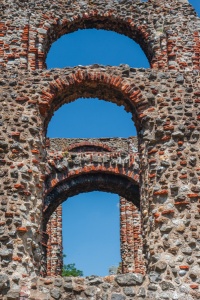 This was an era of great social unrest; nearby St John's Abbey gatehouse was built after the abbey was attacked by peasant rebels, and the town authorities obviously feared further outbreaks of violence. This section of wall was heavily damaged in the Civil War Siege of Colchester and 1648, and was repaired with profuse use of red brick.

Just beside St James Church on East Hill is a Roman drain. You can also see sections of the wall at the northern edge of Castle Park (also visible from the raised section at the north end of the Upper Park, just behind the castle). In this section is Duncan's Gate, a small postern gate named for the 19th-century amateur archaeologist who discovered it. There are sections of original Roman drains near the gate.

There is no one specific place to see the Roman walls, but I'd have to say that the area around the Balkerne Gate offers the best ease of access and some of the best-preserved bits of the wall all in one place. And immediately beside the gate is the historic church of St Mary's at the Walls, and the iconic Jumbo Water Tower.

When we visited there wasn't really any useful signposting that might help explore the Roman walls, which is a real shame. The best alternative I can suggest is to pick up an inexpensive map from the tourist information centre on Queen Street. 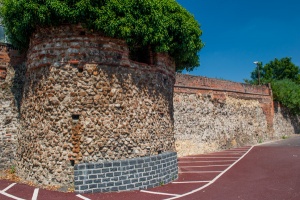 Medieval bastion in the Roman wall 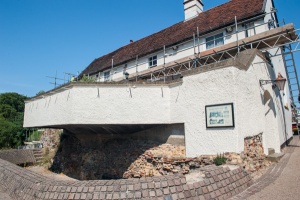 Hole in the Wall pub, Balkerne Gate
and exposed section of wall