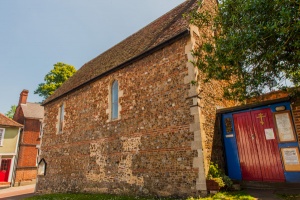 This attractive 11th-century building stands just outside the wall surrounding Colchester Castle's extensive gardens. The building almost certainly dates to the late Saxon period, though the first written record comes from 1097. However, the roots of the church go back much further in time, and the chapel stands atop Roman foundations.

Around 60AD the Iceni queen, Boudicca, rebelled against Roman rule and razed the burgeoning Roman town of Camulodunum (Colchester), slaughtering some 30,000 inhabitants according to [Roman] accounts.

Boudicca's rebellion was eventually quashed, and Roman Colchester rebuilt. One of the new structures the Romans erected was a theatre. We do not know how long the theatre was in use, but it seems reasonable to assume that it was still in good condition when the Romans left Britain in the early 5th century. 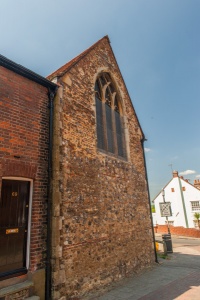 Fast forward several centuries and the new ruler of East Anglia is the Mercian king, Offa. In the middle of the 8th century, Offa visited Colchester and built a chapel dedicated to St Helen within the ruins of the earlier Roman theatre.

An alternative - and highly unlikely - version of history suggests that the first chapel here was actually founded by Empress Helena in the 3rd century AD, and Offa merely rebuilt the existing chapel. Helena was the daughter of King Coel (Old King Cole of nursery rhyme fame). Her son was Constantine, who would become Emperor of Rome, and Constantine was said to have been born in Colchester.

The chapel we see today stands on the theatre's foundations, and sections of the Roman wall can be seen at the base of the chapel walls. Much of the lower parts of the wall have a core of Roman wall, too. A series of black bricks laid in the roadway show the course of the Roman theatre walls.

The Normans rebuilt Offa's chapel at the same time they built the nearby castle (around 1076). The chapel was never a regular parish church. In the 14th century a priest named John of Colchester founded a chantry at St Helen's, with an almshouse. 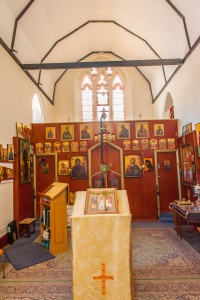 Over the ensuing centuries the chapel underwent numerous stages of rebuilding, and changes of use. It was for a time a Quaker Meeting House, a private dwelling, warehouse and a library. It even had a floor inserted to make it a two-storey dwelling, which is rather hard to imagine given that it is quite a low building to begin with.

In 1880 the Round family, owners of the castle, purchased the chapel and hired architect William Butterfield to restore it. When Butterfield was finished the chapel was given to the local parish as a meeting room and parish hall. In the 1950s it was used as a storeroom by the castle, but it is today used as a Greek Orthodox Church and is usually open daylight hours to visitors.

The chapel is an extremely simple building, with a very small entrance at the north-west corner, leading into a rectangular chamber that extends the full length of the building.

A short distance down St Helen's Lane is an open space that was once the main Quaker burial ground for Colchester. 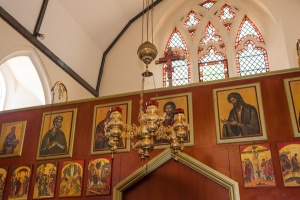 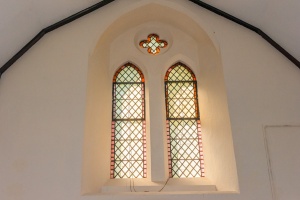