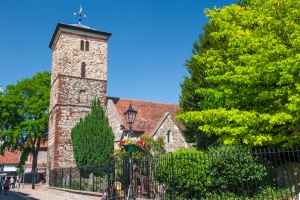 Holy Trinity is the only Saxon building still standing in Colchester's historic town centre and the oldest standing building. The tower has a triangular arch over the west door of the tower, typical of late Saxon style, and has re-used Roman bricks incorporated into its walls. The tower dates to the mid-11th century, probably around 1050AD. The body of the church as we see it today was built in 1349.

In the churchyard is the grave of William Gilbert (or Gilberd), physician to Queen Elizabeth I. Gilberd is known for his early experiments with electro-magnetism. The Town Watch visits Gilberd's grave each year to lay a wreath. Another notable burial is that of John Wilbye (d. 1638), a composer of English madrigals, who came to Colchester to be a music tutor. His best known work was 'Flora, give me fairest flowers'.

The church was made redundant in 1956 and was briefly a museum of rural history. It is no longer used for worship and is used as a combination art centre and cafe, with local artists and craftspeople maintaining small stalls with their works for sale.

Historical features can be a bit hard to see amid all the stalls and cafe tables, but bear with it; there are definitely some interesting medieval and later features. Near the south entrance door is a 16th-century font, nicely carved, and several fragments of medieval glass can be found in the large windows.

There are some very nice 17th-century hatchments on the walls, a very attractive monument to William Gilberd, and a small tablet to Read Admiral George Elliott (d. 1795). One of the most interesting features is a series of carved and painted heads that decorate the nave and south aisle arcades. 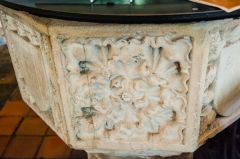 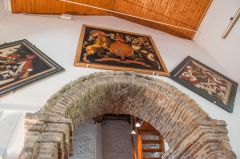 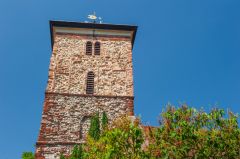 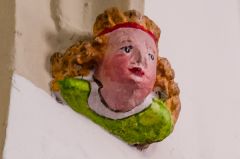