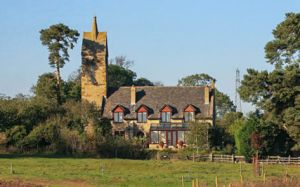 Brentingby, St Mary's Tower
A peculiar tower in a saddleback design is the most striking feature of this redundant 14th-century church. The tower and spire have been preserved for their historic interest, but the body of the church has been converted into a private dwelling.

The medieval church was rebuilt in 1660. It consisted of an aisle-less nave, chancel, and west tower. It was declared redundant in the 1950s. The body of the church was pulled down in 1977, saving only the tower.

Excavations before the church was destroyed revealed that it had a series of medieval wall paintings, including a skeleton holding a spade and spear, and a man carrying an implement, possibly a musical instrument.

The skeleton painting, thought to be a memento mori, or reminder of mortality, was carefully removed for display at Newarke Houses Museum in Leicester. There is some doubt as to how old the paintings were, but the most likely date is the early 15th century, based on the style of footwear depicted.

The tower is made of limestone, rising in four stages with string courses between each stage. There are blocked lancet windows on the lower two stages, and open lancet windows on the top two stages, plus a louvred belfry opening. The striking top of the tower has a saddleback roof, topped by a slender octagonal spire. The roof gables have ogee-headed niches decorated with ball-flower carvings.

Please note that the core of the church is now a private house to which there is no admittance. The tower, however, is in the care of the Churches Conservation Trust and can be easily viewed (exterior only).