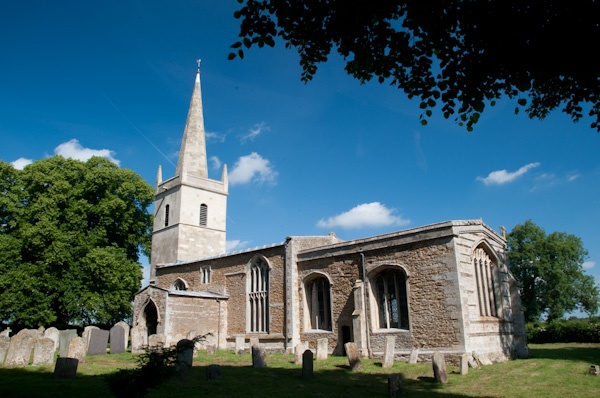 The parish church of St Peter and St Paul dates to the 13th century. The nave arcades and chancel arch are 14th-century work, while the clerestory, aisles, and transepts are 15th century.

The church guide mentions several architectural highlights, including the pair of windows high above the chancel arch - an unusual location in English parish churches.

There are an amusing collection of carved faces above each column and around the walls. These are probably prominent local characters, possibly donors to the church. One face is shown sticking out his tongue. The carving is thought to have been done by the same team of apprentice masons who worked on Canterbury Cathedral.

A large stained glass window in the south transept is a memorial to Sir Henry Clarke Jervoise. Under the window is a wonderfully carved incised marble slab, commemorating John Clarke (d. 1532) and one of his two wives.

To one side of the window is an ornate calligraphy scroll in memory of Langham's most famous son, Simon of Langham, who was born here about 1330. Langham became a monk at Westminster Abbey and rose through the church to become Archbishop of Canterbury, Chancellor of England, and eventually, a Cardinal.

The font is 14th century, and there is a suitably weathered oak chest dating to the 16th century. One fascinating and unexpected feature is a pair of elephant carvings sitting in Oriental splendour atop the vestry wall. I can't say I recall seeing elephants before in an English country church!

The carvings commemorate the role played by the Owen family in supporting the church; the Owens were heavily involved in the East India Trading Company, which explains the unusual symbols.

Outside the church, near the south door, is the stump of a medieval cross. Also near the door is the grave of Sir Kenneth Ruddle, a member of the brewing family that produced Rutland Bitter for many years. 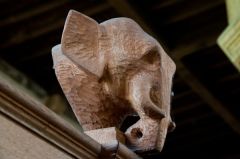 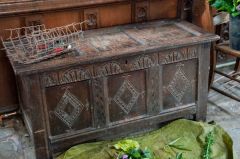 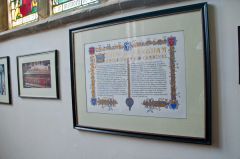