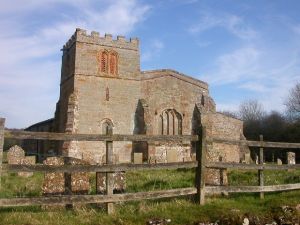 Wolfhamcote, St Peter's Church
The church of St Peter at Wolfhamcote stands surrounded by the earthwork remains of a deserted medieval village. The church is primarily a product of the 13th and 14th centuries.

This extensive building consists of a chancel, nave, north chapel, south porch, north and south aisles, and tower. The most interesting historical feature is the 14th-century rood screen, with a cinquefoil traceried head. There are a total of 11 14th-century benches, featuring several examples of rather rustic period carving.

Another highlight is the Hood Mausoleum, a Victorian addition housing monuments to generations of the local Hood family. Among the Hood memorials is that of Samuel Tibbits Hood, Viscount Hood, who died in 1846. There is also a royal coat of arms to Queen Anne. The most interesting historic memorial is in the chancel, where there is a brass tablet to Thomas Benyon, (d. 1687).

NB. You will sometimes see the name of the village listed as Wolfhampcote with a 'p'.

The Granary at Fawsley - 5.7 miles
Daventry, Northamptonshire
Stay from: £50.00