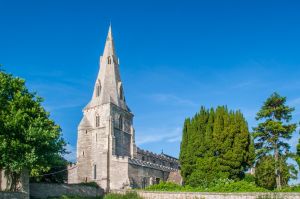 The parish church of St John the Baptist in North Luffenham dates back to the 11th century. There is much of interest here, including medieval wall paintings, fragments of 14th century stained glass, and carved angel figures decorating the roof, many of which still show considerable traces of paint.

The original Norman building was a simple aisle-less nave but in the 13th and 14th centuries the building was extended with the addition of a north, and later, a south aisle. The west tower was added around the same time. The tower features a peculiar projecting stair turret.

The chancel dates to the period 1300-1325 and features a beautifully crafted double sedilia. On the wall within the sedilia is a brass plaque to Archdeacon Robert Johnson, the 16th-century churchman who founded both Uppingham and Oakham public schools.

The octagonal font is 14th-century work but stands on a modern stem.

Only fragments of medieval stained glass remain. There is a small modern stained glass window commemorating members of the RAF, the Canadian Air Force and the Allied Air Force who served at RAF North Luffenham from 1940-1998. 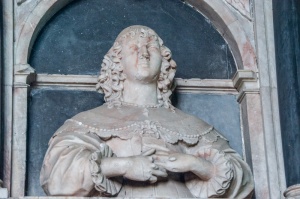 One of the most intriguing furnishings is a late medieval brass chandelier, the gift of John Digby, lord of the manor.

The finest memorial is an ornate wall monument to Mrs Susanna Noel (d 1640). The bust was damaged by Parliamentary troops during the 1643 sack of North Luffenham. The soldiers were part of a force of 1300 men commanded by Lord Grey, who besieged a small garrison of just 200 under Henry Noel. Not surprisingly Noel and his men withstood the siege for just 24 hours before they were forced to surrender.

The Parliamentary troops almost immediately broke the terms of the surrender and plundered North Luffenham village, burned the manor house, and heavily damaged the church, including the Noel memorial.

This is a really imposing church, with a chancel that seems every bit as long as the nave! 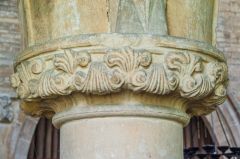 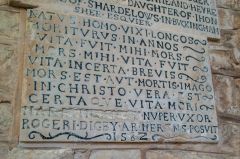 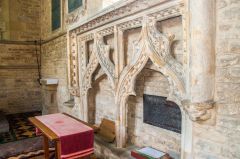