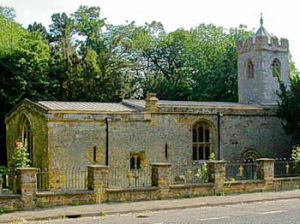 Upton, St Michael's Church
This delightful Norman church was probably built as a private chapel for the lord of Upton manor. It was rebuilt in its current form in the late 12th century. The church stands in the grounds of Upton Hall, which is now a school - and unfortunately right beside a busy A-road.

The oldest parts of the church are the north and south doors and the priest's door, all of which are Norman. Until 1968 it served as a chapel of ease for St Peter's church in Northampton.

Look for the coat of arms of the Knightly family over the south porch. The Knightlys added the porch around 1587, shortly before they sold the estate to the Samwell family. There is only one clock-face in the tower, and it can only be viewed from Upton Hall, indicating St Michael's function as a family church.

The interior features a number of interesting monuments including many to the Samwell family. Notable memorials include that to Sir Richard Knightley (d.1537) and his wife Jane, with recumbent effigies to the deceased couple, and a 1677 memorial to James Harrington, political philosopher and author of The Commonwealth of Oceana, a utopian vision of an ideal republic.

In the nave there is a series of four hatchments to 17th and 18th-century members of the Samwell family.

Outside the church, you can discern earthwork remains of a lost medieval village.

St Michael's is no longer in regular use and is cared for by the Churches Conservation Trust.

The Granary at Fawsley - 10.3 miles
Daventry, Northamptonshire
Stay from: £50.00