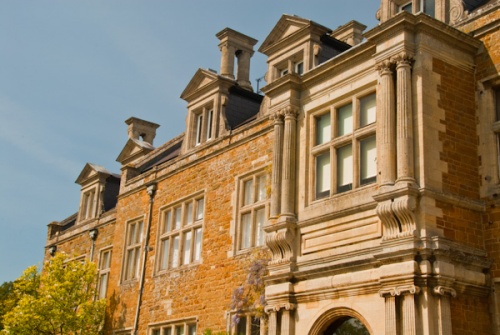 Often overlooked by visitors flocking to see nearby Althorp is the neighbouring historic house and garden of Holdenby. Holdenby was built by Sir Christopher Hatton as a suitable residence to entertain Elizabeth I and her retinue. Hatton was a great favourite of Elizabeth - she called him 'her lyddes' (eyelids) while Robert Devereux, Earl of Essex, was 'her eyes'.

Hatton created the largest house in Elizabethan England at Holdenby, featuring 123 extremely large, glazed windows. As a mark of his standing in Elizabeth's eyes, Hatton refused to live in his new house until Elizabeth had visited it. Not surprisingly, the construction of this grandiose house helped bankrupt Hatton, and he died penniless a few years later.

After Hatton's death the house became a royal palace under James I, and ironically, was used as a prison for James's son, Charles I. Charles, not unnaturally, plotted to escape from his gilded prison, but Cromwell wisely had him removed to a more secure gaol. In 1709 the house was purchased by John Churchill, Duke of Marlborough, and passed through the female line to the Lowther family, who still inhabit the house today.

It is interesting to note that the attractive house that we see today is actually little more than the kitchen wing of the Stuart palace, representing only about 1/8 of the original building size. The interiors feature lovely 18th-century furniture, artwork, and decoration, and some rooms retain their Elizabethan furnishings. 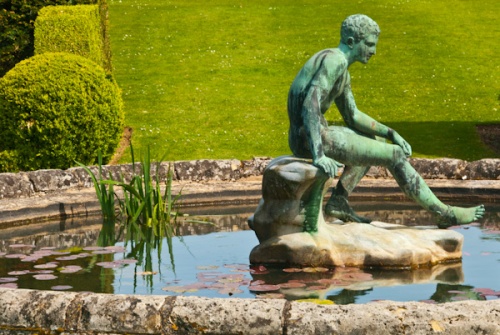 A garden fountain and sculpture

The house is surrounded by a 20-acre Grade-I listed garden, with formal lawns, hedges, and terraces. At the heart of the garden is the original Elizabethan rose garden. Nearby is a walled kitchen garden with a Victorian greenhouse.

The Elizabethan garden was replanted in 1980 using only plants that were readily available in 1580. A special bordered walk is named for King Charles, who went for frequent walks while he was incarcerated here. The king was such a fast walker that his official gaoler, Lord Pembroke, had trouble keeping up.

Holdenby House features a Falconry Centre within the grounds. The Falconry Centre draws thousands of visitors every year to see these striking birds of prey. Among the breeds on display are the Black Eagle, a rare native of southern Africa, Lanner falcon, Harris Hawk, and European Eagle Owl.

The house is only open on specific days, or by appointment, while the garden is generally limited to spring and autumn opening. The Falconry Centre is open spring through summer. For current details please see the Holdenby House website.

While you're visiting the gardens don't miss the chance to see the ancient church of All Saints at Holdenby.

The Granary at Fawsley - 11 miles
Daventry, Northamptonshire
Stay from: £50.00