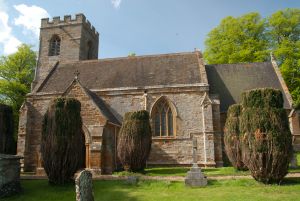 The church of All Saints dates to the early 13th century, but the core of the current building is largely 14th century with major Victorian rebuilding under the omnipresent Sir George Gilbert Scott. The building consists of an aisled nave, west tower, south porch, and chancel, built mostly of local ironstone.

The church stands behind Holdenby House, far removed from the village it was meant to serve. When Sir Christopher Hatton, Lord Chancellor to Elizabeth I, decided he wanted to build a new mansion, he had the village of Holdenby moved to make more room for his opulent new house and gardens, leaving All Saints church where it stood.

Ironically, the house that he built did not stand long beyond his own lifetime. The restored gardens, however, are open to visitors today.

One of the best features of All Saints is the series of beautifully carved medieval misericords decorating the chancel stalls. These are primarily floral scrolls and foliage, but there are also likenesses of animals mixed in, including an ape, a winged creature, a dragon, and a cherub. The misericords most likely date to the period between 1330-1340.

There are also an unusual series of seven painted texts dating to the Elizabethan period. Such texts are usually associated with the Jacobean and Georgian periods, so to find such a large series from the 16th century is quite rare.

There are a number of interesting monuments dating to the 13th century. Among the finest is an alabaster slab commemorating William Holdenby (d. 1490) and his wife. There is also a very nice Elizabethan screen that was originally built for Holdenby House.

More self catering near Holdenby, All Saints Church >>

The Granary at Fawsley - 11 miles
Daventry, Northamptonshire
Stay from: £50.00

More bed and breakfasts near Holdenby, All Saints Church >>