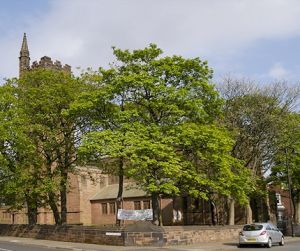 Christ Church was begun in 1891 and completed in 1899. It replaced an early Victorian church built in 1840. The church commissioners launched an architectural competition to find a design for the new building, but they weren't happy with any of the entrants.

They decided to simply award the contract to the firm of Paley, Austin and Paley from Lancaster, a company with a long history of church design in the north of England. The building cost 21,956 pounds.

The church was damaged in WWII but has now been rescued from years of dereliction. The interior is spacious and full of light from two great windows, one at each end. It is built of red sandstone quarried at Bootle and topped by a roof of Westmorland slate. The style is a mix of Decorated and Perpendicular Gothic with a nod to Art Nouveau in some decorative elements.

The stained glass of the west end depicts the twelve Apostles, while the great east window shows Christ with a variety of Biblical figures and angels. Most of the stained glass is the work of Shrigley and Hunt, one of the foremost manufacturers of ecclesiastical glass in the late 19th century. A few panels of glass from the 1840 church were retained.

The interior furnishings have been removed, which does have the advantage of allowing you to see the architectural stonework more clearly. This has also exposed the church floor, which is primarily stone flagging, but the chancel is covered in red, black, yellow and green tiles.

Christ's Church is not used for regular worship but has become a multi-purpose venue for performances and exhibitions. It is now in the capable hands of the Churches Conservation Trust. As of this writing, it is not normally open but visits can be easily arranged through the CCT.

This large first-floor apartment rests in Liverpool and can sleep twelve people in one bedroom.
Sleeps 12