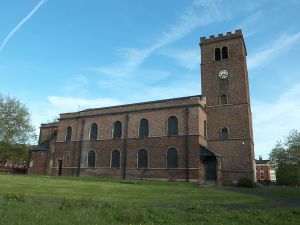 Liverpool, St James Church
A Georgian town church in the Toxteth area of Liverpool, opposite the Anglican Cathedral. St James' was built in 1774 by Cuthbert Bisbrowne. The design is very simple, with a high, two-storey aisled nave, small chancel, and west tower, all of plain brick.

The interior is a traditional Georgian design, with galleries overlooking the nave on three sides, supported on cast-iron pillars. This is thought to be the first use of cast-iron columns in Liverpool and one of the earliest in England.

The two levels of large windows in the aisle make the interior very light and spacious. The large east window was designed by Henry Holiday and installed in 1881.

The timber roof was installed in 1846 by architect William Culshaw, and the chancel was redesigned in 1900 by H Havelock Sutton.

The interior has a number of monuments dating to the 18th and 19th centuries, commemorating many Liverpudlians involved in the slave trade.

For several years St James's was redundant, and in the care of the Churches Conservation Trust, but it is once more in use as a fully functional Anglican church.