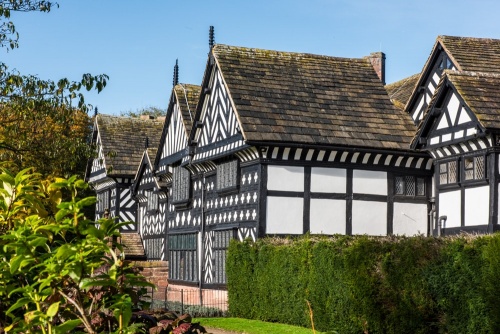 Speke Hall from the south lawn

Speke Hall, near Liverpool, is one of the finest examples of a timber-framed medieval house in England. The Hall boasts a Tudor great hall with secret priest's holes, as well as Jacobean and Victorian furnishings.

Speke Hall dates to 1530, though it is based around an earlier medieval house. It was built by the Norris (or Norreys) family, who were keen to make a 'statement' of their wealth and importance. One way they showed off their wealth was to build Speke Hall with a large number of glass windows, at a time when glass was expensive.

The main focus of the Norris's efforts to impress visitors was the Great Hall, a magnificent example of Tudor architecture.

The Norris's were devout Catholics, and their new house was furnished with a priest's hole so visiting clerics could hide from the authorities. A peephole was built into a bedroom chimney to allow a view over the approach to the house, so a watch could be kept for the authorities.

Another 'security measure' was The Eavesdropper; a hole under the eaves above the main south entrance door designed so that a servant could listen unobtrusively to people waiting at the door to gain entrance. 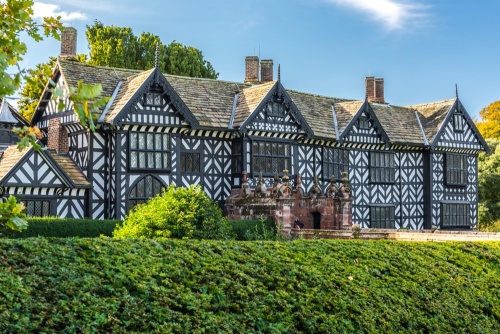 The north front of Speke Hall

Shortly after the Hall was built a parlour and north wing were added. A west wing was added in 1547, and the north range in 1597. What is remarkable is how little Speke Hall has changed since that last addition to the building.

The house passed by marriage to the Beauclerk family, who sold it to the Watt family in 1795. During the 19th century the building was neglected, and used for a time as a cow shed. The last Wyatt owner was Adelaide Watt, who inherited as a very young child.

During her youth the Hall was rented to Frederick Leyland, who spent much of his own money transforming the crumbling building into the romantic Elizabethan building we see today. Leyland filled the house with historical treasures including pieces of furniture rescued from other historic houses in the area.

When Adelaide Watt turned 21 in 1878 she immediately turned Leyland out of Speke Hall and took over management of the estate for herself. She was a fascinating character; she never married - itself an oddity in late Victorian England - and ran her estates with an iron hand. Tenants were expected to attend church and to vote Conservative. In many ways, she was a progressive landlord, though she vehemently opposed the Manchester Ship Canal, which passed directly beside her lands.

Watt died in 1921, leaving the house to be looked after by her butler for the next 21 years. It was given to the National Trust in 1942. 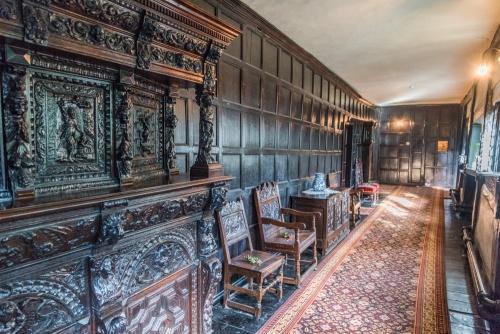 Surrounding the house are gardens designed in the 1850s. The most interesting garden feature is a pair of yew trees, dubbed Adam and Eve. They are mentioned in documents of 1712 but are likely at least 500 years old and perhaps as old as 1,000 years.

The trees stand in the cobbled inner courtyard, reached through a doorway in the north entrance facade. When the house was built the north front was open, and visitors would have passed between the trees to reach the entrance in the south wing.

Only later was the north wing added, creating a completely enclosed courtyard now dominated by the pair of trees. Planting yew trees in front of the house entrance was a common custom as they were thought to help ward off evil spirits.

One rather unusual feature in the courtyard is a piscina built into the east wall. It may have been brought here from a nearby church but it is highly likely that it came from a family chapel erected by Sir Henry le Norreys around 1367. 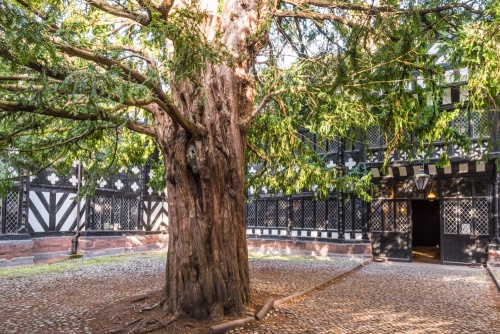 Adam (or Eve) ancient yew tree in the courtyard

Like any house with a long history, Speke Hall is said to be haunted. It has appeared on the TV series Most Haunted (2009). The resident ghost is said to be Mary Norris, who inherited Speke Hall in 1791. Mary Norris married Lord Sidney Beauclerk, who proceeded to gamble away the family fortune.

When Beauclerk told his wife they were ruined, she threw their newborn son out the window of the Tapestry Room into the moat outside. She then ran to the Great Hall where she took her own life. Her ghost is said to haunt the Tapestry Room.

Though the house itself is Tudor, the interiors have been decorated and redecorated through the years as fashions changed. Much of the decor is Arts and Crafts inspired, and some of the interior rooms are furnished with original William Morris wallpaper. The Jacobean plasterwork is exquisite, and there are magnificently carved pieces of Tudor and Jacobean furniture throughout the house. Modern by comparison is the fully-equipped Victorian kitchen and servants' hall. 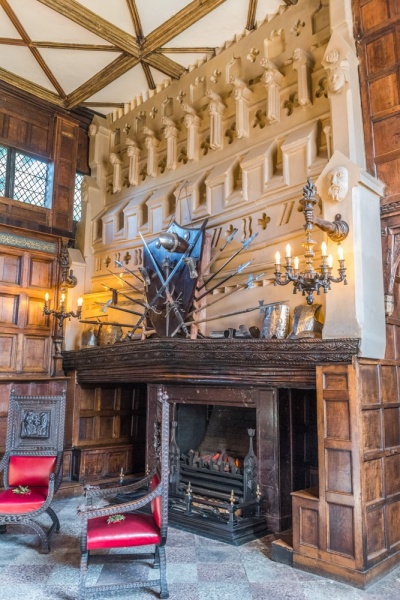 The ornate fireplace in the Tudor great hall

You can get hands-on in the Victorian Billiard Room and play a game of billiards as our family did (I lost to my son).

A short walk from the Hall is the Home Farm, a model Victorian farm. There are woodland trails, a hedge maze, and walks along The Bund, an earthwork designed to cut noise from nearby Liverpool John Lennon Airport. You can get excellent views over the Mersey from atop The Bund and on a clear day you can easily make out the hills of North Wales in the distance.

The restored garden features fanciful topiary, a rose garden, wide lawns, a stream garden and a summer border. The original moat surrounding the Hall has been transformed into a broad sunken garden.

Speke Hall is one of the most beautiful examples of a Tudor house in England, a wonderful timber-framed building with a fascinating history. It is interesting to note that the beautiful 'black and white' timber-framed architecture with whitewashed infill is entirely a romantic Victorian ideal. The original Hall would have timbers painted brown or green, with the wattle and daub infill painted a creamy brown colour. 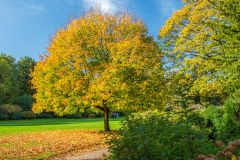 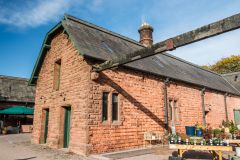 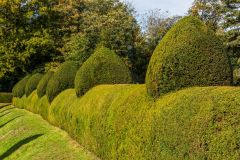 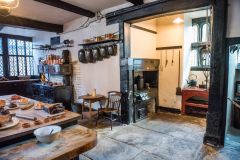 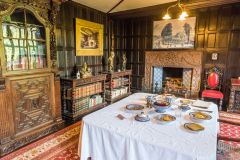 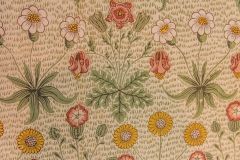 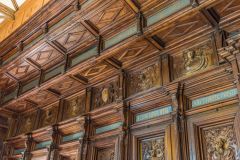 More self catering near Speke Hall >>