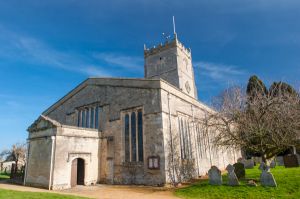 A large cruciform church in a sizeable village on the border of Oxfordshire and Wiltshire, the main interest of St Andrew's lies in the fact that most of the building - with the exception of the tower - was built during the reign of Charles I, at a time when there was very little in the way of church building in England. As such, it presents a rather unusual style - a merging of late Perpendicular and Classical.

The church is composed of an aisled nave, chancel, and chapels, with a sturdy late medieval central tower. It is entered through a paved west porch, where you will find, rather oddly, a royal coat of arms to George III, dated 1764. I can't think of another church I have visited where the coat of arms is in the porch!

Inside the church, the arcades are particularly fine, but rather unusual, boasting rounded arches supported on Italianate Tuscan columns. There is a very nice Jacobean pulpit, and fragments of medieval glass, including a coat of arms of the Abbey of Cirencester, which owned St Andrew's until the Reformation.

The font is 13th century and is made of polished Purbeck marble. In the south aisle, tucked under a table when I visited, is a much worn 13th-century effigy which is probably a knight, though some theories suggest a lady or a friar. The truth is it is so worn as to make all identification pure conjecture.

The origins of the church are a bit of a mystery. It is possible that there was a late 9th or early 10th-century Saxon minster on this site. We do know that a new church was built in the 12th century, and extended in the 13th century, and again in the 15th century when the tower was added. Parts of the 12th-century church are built into the current west wall.

In 1638 Lord Craven had the medieval building dismantled, leaving intact only the tower with its crossing arches. He then built long arms from each of the tower arches to create the building we see today. 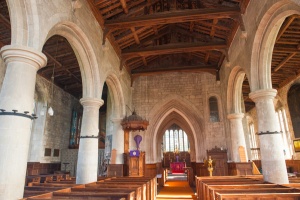 Stepping into St Andrew's for the first time is an awe-inspiring - and slightly startling - experience. The first thing that hits you is the sheer sense of space and light; the nave roof seems to soar above your head, and the huge Perpendicular windows let in an enormous amount of light.

That sense of space is only enhanced by the slender, elongated Tuscan columns, which are unlike anything I've ever seen in an English country church before.

Exploring the church the thing that really struck me was the beautiful monuments to members of the Barrington family. These are numerous and very grand. Tucked away in the north-west corner of the church is a monument in white marble to Admiral Samuel Barrington, a naval hero who in 1759 captured the French vessel Count de Florentine off St Lucia. The French captain's white flag of surrender was brought back to Shrivenham church.

In the chancel is a lovely brass chandelier dated to 1726. The chancel floor is very striking, with a black and white design in marble. The east window has the only coloured glass in the church, including n image of a bishop with the date 1505. This may be John Hawkeborne, Abbot of Cirencester Abbey.

The chancel walls have wonderful late 17th and early 18th century memorials, including that of Sir John Widman (d. 1693), a fascinating character whose colourful career is wonderfully described in the church guide.

In 1683 Widman was implicated in the Rye House Plot to kill Charles II. He later supported the Duke of Monmouth's abortive attempt to seize the throne, before throwing his support behind William and Mary. When William and Mary's bid for throne succeeded, Widman bought the position of Postmaster General. He was knighted in 1692 but died the following year. 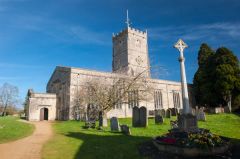 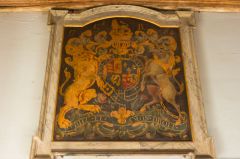 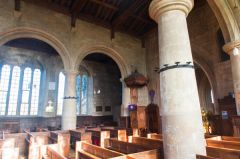