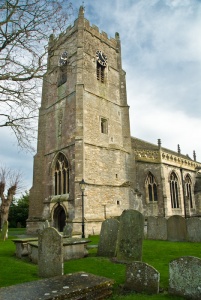 St Michael's, Highworth, is located in the centre of the conservation area of old Highworth, just behind the Market Square. The most immediately striking thing about St Michaels is the large, high parapet which extends along the roofline of the south front. This is 15th-century work, as is the large south porch with the priest's quarters above the entrance.

Much of the exterior you can see is 14th and 15th-century work, but the church itself dates back to at least the time of the Domesday Book. The earliest remaining feature of the church is a small single-light window in the chancel.

The south door features an excellent 15th-century moulding, with the very flat lines characteristic of this period and the later Tudor style. Contrast this style with the pointed style common in the earlier Gothic period. To the left of the south porch is a small scratch-dial. This is a very simple device, similar to a sundial, consisting of a small hole surrounded by radiating lines scratched in the stone. 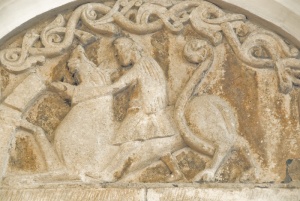 As you enter by the south door, the first thing you see is the very large royal coat of arms on the north wall opposite. This dates from the reign of George III. Closer at hand is a very large oak chest, bound with padlocks. This chest probably served as a secure holding place for church and town documents.

The age of the chest is a matter of conjecture. According to the informative church history leaflet - available for a small charge - it may be as early as the 10th century. Though this seems somewhat unlikely, it is obviously of very great age.

Beside the south door is the font, which dates to the 15th century. This rests upon a square, ornamented base, which may have formed part of the earlier Norman church on this site.

Immediately above the interior of the south door by which you enter the church is the pride of St Michael's; a beautifully carved tympanum dating perhaps to the early 12th century. The centrepiece of the tympanum depicts Samson wrestling with a lion.

The carving is superbly executed, in a style very much like earlier Saxon work in this area. To the right of the tympanum is an extremely tiny window. This window, really no more than a slit, allowed the priest in his room above the south porch, to view the altar of the church.

Other notable features of the interior include two carved wooden seats in the chancel. These are quite rough and very worn, and are thought to belong to the 15th century. To the south of the chancel is the Warneford Chapel, which contains numerous memorials to members of the Warneford family, dating back to the 17th century. 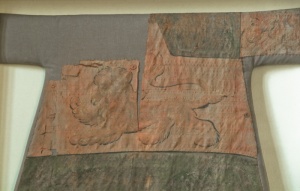 In the south crossing, a small glass case is set upon the wall. In the case is displayed a Civil War era tabard, or short-sleeved coat, worn by Captain T. Batford during the period 1642-1651. The tabard is in quite good repair and remarkably unfaded considering that the material is not protected from sunlight.

The exterior of St Michael's features another reminder of the Civil War era. Beside the west door is a large hole in the masonry. This is thought to have been made by a cannonball fired during the assault on Highwiorth by Parliamentary troops on 27 June 1645. The church has in its possession a cannonball, thought to be the one responsible for the hole in the wall. This is not, unfortunately, generally on display, but may be viewed by permission.

According to published reports in the London Illustrated News, Highworth church is haunted by a spectral figure. The ghost was last reported seen in 1938 and was described as having a featureless countenance, with dark shadows where the eyes should have been.