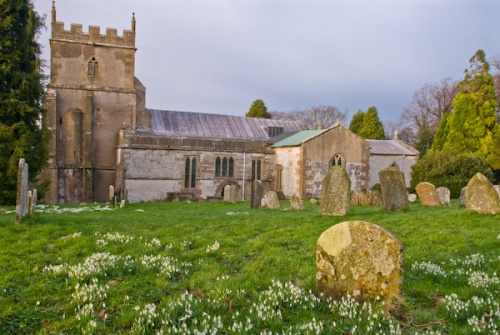 Ashbury church sits on a rise at the top of Church Lane in Ashbury. The village itself is tucked under the edge of the western Berkshire Downs, just a few miles from the ancient ruins at Uffington.

There was a church here as early as middle of the 10th century, when records of Glastonbury Abbey refer to an already existing church on this site. Several monks from Glastonbury lived at nearby Ashbury Manor. Nothing nowe remains of that Saxon church, and the oldest part of the current building is the west end, which dates from the 12th century.

The church is entered through the south porch. Immediately to the left upon entering is a colourful stained glass window brought here from nearby Ashdown House (now managed by the National Trust). In the north transept is a glass display cabinet showing a beautifully preserved copy of a King James bible, dated to 1634. The bible bears the imprint of Robert Parker, a London printer responsible for the first official printing of the 'King James' bible.

One of the more interesting features of Ashbury church is the Norman norh door. This is best seen from the exterior, where the traditional Norman dogtooth and chevron decorative patterns can be best appreciated.

The exterior also features several interesting grotesques, or carved figureheads, including a double-headed human figure on the north west corner of the tower.

The north aisle and the nave feature carved stone corbel heads, including several animal heads, and unusually for this area, several carved wooden corbel heads. The chancel dates from the 14th century, and it is here that the most interesting historical aspect of the church is found.

Three medieval memorial brasses are set into the floor of the chancel; the outer two are those of Thomas Bushbury (died 1409) and William Skilton (died 1448). These two churchmen are depicted in their ecclesiastical robes, while the centre brass, that of John de Walden (1360) shows a knight in an attitude of prayer. The three brasses are extremely well-preserved, though there are missing sections.

In the south aisle there is a painted board commemorating the bequest of a gift to the church by a wealthy late 17th century parishioner, and in the Lady Chapel several interesting examples of lace needlework are hung upon the wall. Taken as a whole, Ashbury St Marys is a very satisfying church to visit, with some interesting historical bits and bobs to explore.

One final note; Ashbury is the place where the very first Sunday school was held, in 1777. The man responsible, Rev.  Thomas Stock, has his memorial set upon the north wall.

About Ashbury St Mary Church
Address: Church Road, Ashbury, Oxfordshire, England, SN6 8NB
Attraction Type: Historic Church
Location: At the top of Chapel Road, in the centre of Ashbury (just up from the pub). Very limited parking beside the church, but there should be no trouble parking along the road in Ashbury.
Location map
OS: SU265850
Photo Credit: David Ross and Britain Express