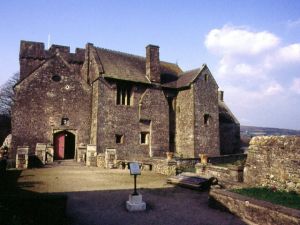 Penhow Castle
Penhow Castle, fully restored, was, at first, a medieval keep. Then a hall block was added in the 15th century, and later a Stuart manor home. There are a 13th century curtain wall and a 12th century keep tower and ramparts on view. Rooms on the audio tour include the Norman bedroom, a 15th century great hall, a minstrels' gallery, a Tudor moat room, a Charles II panelled dining room, an 18th century kitchen and a Victorian housekeeper's room.
The castle was purchased by a London businessman and closed to the public in 2002. There are, however, good views of the castle from the medieval parish church of St John the Baptist, which dates to the 13th century. As of this writing there are no plans to reopen Penhow to the public.

More self catering near Penhow Castle >>