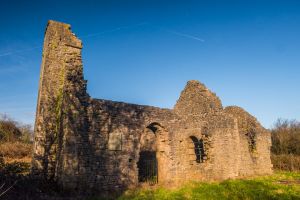 The roofless ruins of a small 12th century chapel overlook the remains of a deserted village in a field north of Crick.

Shortly after the Norman conquest of south Wales this small stone chapel was built to serve the village of Runston. The village may have existed as early as the 10th century. It was never very large, reaching its maximum size of about 25 buildings in the medieval period. These buildings were laid out along several trackways near a village green, and what may have been a manor house.

Though it survived the Middle Ages, Runston village gradually lost its population, and by the 18th century only a few residents remained. The landlord seems to have allowed the buildings to decay in order to get rid of illegal tenants! If that was his strategy, it worked, for both church and village were in ruins by the end of the century. The village is now recognisable as bumps in the field beside the chapel.

The chapel features several very nicely crafted Romanesque lancet windows, but the best surviving feature is the chancel arch, which seems almost completely intact. The east end and chancel wall rise to a gable peak, and at the west end the remains of a tower still stand above wall height.

One odd fact about Runston is what happened to its medieval font. When the chapel fell out of use the font was taken to St Julian's church in Newport, and used as a holy water stoup beside the north-west entrance. 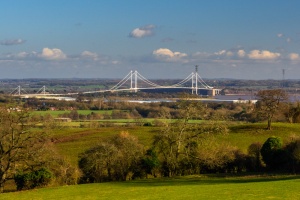 In the chancel we found what appears to be the remains of a medieval piscina set in the south wall. The chapel is surrounded on one side with a curious low stone wall, perhaps once meant to encircle the churchyard.

Runston is not the easiest place to find. The first time we tried to find the chapel we drove right past the trail. Even the second time, when we knew where to look, it wasn't obvious. We've since been informed that the land surrounding the chapel is currently leased to a field archery business. So it's not safe to walk to the chapel.

CADW notes that the monument is temporarily closed due to the access route being unsafe.

This is unfortunate, for the chapel itself is a very interesting building, a good example of a simple medieval country chapel. The most interesting feature is the chancel arch, as mentioned, but the south doorway is in good shape, and the deeply splayed Romanesque window in the nave is beautifully made. 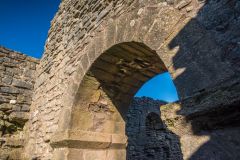 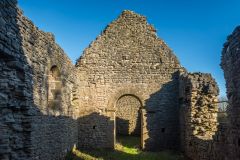 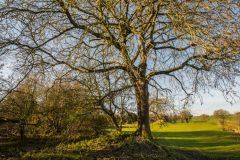 More self catering near Runston Chapel >>